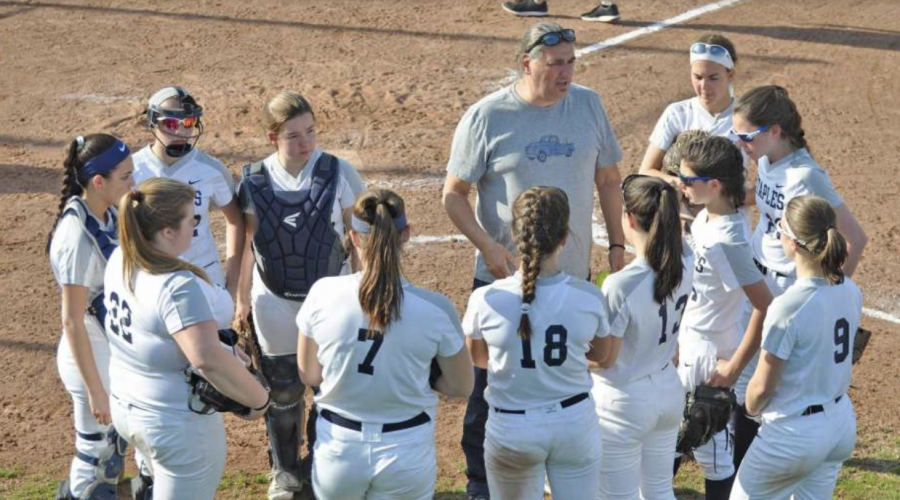 By Audrey Bernstein ’20 and Kaela Dockray ’20

*Names changed to protect the privacy of these sources

Girls’ softball coach since 2016, Luigi Cammarota, confirmed on Monday, May 14 that he had been suspended from his position and was placed on paid leave. The suspension followed a series of parental and player incidents and reports to the administration regarding his behavior.

The suspension followed an alleged parental incident occurring on May 4 following a game against Darien. Cammarota described the event for 99.1 PLR. “After the game, the parent approached me and said, ‘Are you kidding?,’ and I said, ‘Is there a problem?’ and he starts going into ‘You’re a disgrace, you shouldn’t be coaching,’ and things of that nature.”

Despite the team’s success this year, many players believe Cammarota’s suspension stems from years of both parent and player complaints. “Many people believe that it was one parental intervention that led to his suspension,” an anonymous player on the team, *Sophie said. “But this has been happening for three years. For the years I’ve been here, it’s been constant yelling at girls, three years of bringing kids down instead of building them up.”

An anonymous parent attested to the behavior described by Sophie. “Luigi didn’t know the difference between being demanding and being abusive,” the parent said. “Many girls quit the program because of him and most of the girls played in fear of his impulsive outbursts and erratic behavior.” In the past three seasons, more than four players have quit the team, according to Sophie.

Sarah, however, believes that the coach’s methods were appropriate. “He would yell at people,” she said, “but then, right after, he would say that he’s not yelling at you to be mean, he’s yelling at you to criticize you for making an error in the field.”

Cammarota’s coaching style led multiple girls and parents to report his behavior to Athletic Director Marty Lisevick in the spring of 2017. Multiple players believe the reports influenced the way Cammarota coaches, but all speculations, as of now, are unconfirmed.

Since Cammarota’s suspension, both the team and individual players have been asked to meet with Principal James D’Amico regarding his absence. D’Amico is currently processing how the players view Cammarota but is not able to give information as to what exactly led to his suspension.

In the meantime, assistant coach Bob Olah will be taking Cammarota’s place for the remainder of his suspension.

Many players feel that Olah’s presence will strengthen the team. “[Cammarota] definitely held a big stress over us and I think him being gone will help people loosen up, relax and play more confident,” an anonymous player, *Claire, said.

Another anonymous player, *Charlotte, agreed that the team will continue to play in spite of the season’s events. “I think something the team has learned to do this season continues to support one another every game, whether good or bad,” *Charlotte said. “We never felt supported by our coach, so we always looked to each other for confidence and acceptance.”