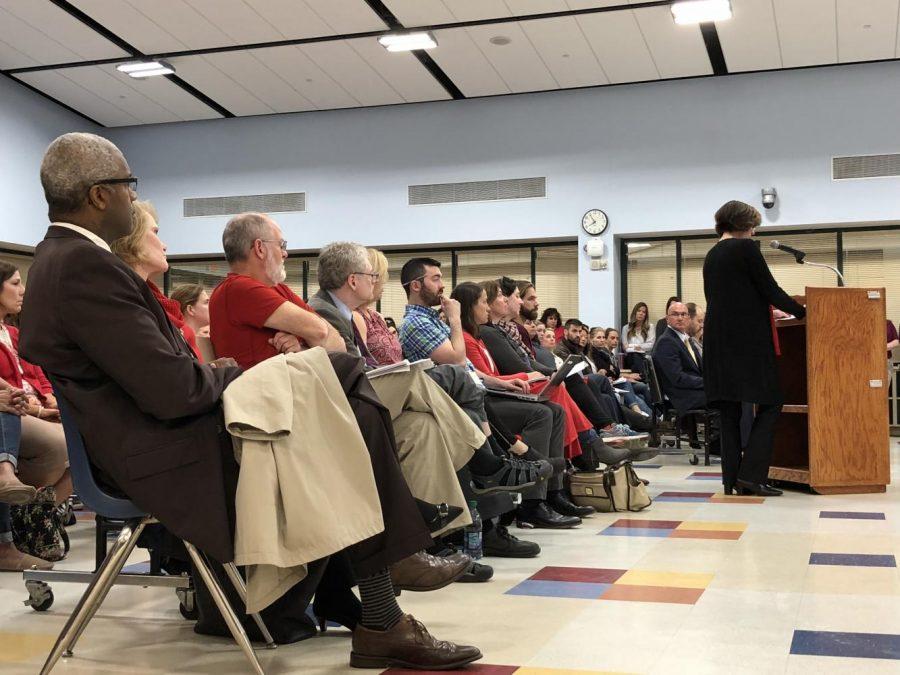 Over 100 Westport Public School District teachers attended the Board of Education meeting Monday, April 23 after 135 non tenured district staff received email notifications Friday, April 20 that their contracts would not be renewed for the upcoming school year.

“We just wanted our voices heard. We want it to be a fair process,” an anonymous Staples High School teacher said. “We understand that, for budgetary reasons, a lot of people are involved,” he continued, “but teachers, and especially non-tenured teachers, didn’t think that we had a fair say, so we wanted to show solidarity amongst each other to be here today.”

The non-renewal notices were sent due to pressures the Board of Education [BOE] faces in meeting over a $2 million dollar budgetary cut decreed by the Westport Board of Finance. The BOE claimed they could save $3 million, according to John Horrigan, one of the two union presidents, if all seven Westport School Unions agreed to switch their health insurance to the state’s health insurance. Six of the seven unions agreed to the switch, but the Teacher’s Union held out, asking that the BOE assure them of reducing their cost shares by 3 percent.

“Right now, we’re trying to discuss an insurance change to switch to the state plan,” Horrigan said.  “They’ve offered to reduce our share of what we have to pay by 1.5 percent […] they’re set to save millions.”

However, the BOE refused the Teacher Union request, and claimed that if the Teacher’s Union did not switch to the state insurance, the BOE may be forced to lay off teachers. This triggered the layoff notice teachers received late last week.

“There was a budget reduction, but,” Horrigan said, “we feel [the layoff notice] was [given] in a punitive fashion.”

“We’re professionals who devote ourselves to providing your amazing children with the very best education every day,” Harvey said. Harvey argued that reducing the teachers’ insurance share by 3 percent would be just compensation for what Harvey saw as multiple financial sacrifices teachers have made in recent years. “After all the step freezes, premium cost share increases and mandatory contribution increases,” Harvey said, “we’ve just never recovered from those hits.”