Gun violence protests in high school: how colleges are standing with the students 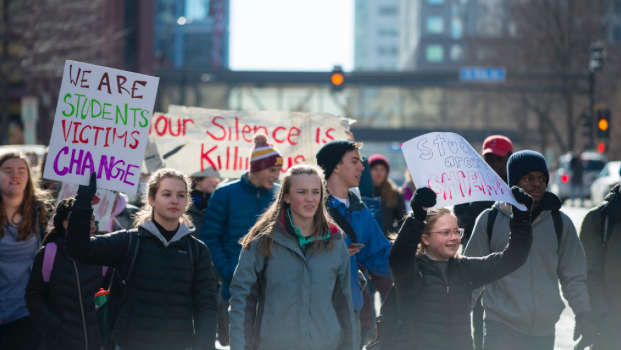 Colleges around the country are supporting applicants’ rights to peaceful protest on gun control for the upcoming walk outs on Mar. 14, and Apr. 20, and the marches taking place on Mar. 24.

“I am going to Indiana University and I am honored to be able to say that my school supports my right to protest,” Abby Greenblatt ’18 said. “I can’t wait to participate in the walkout.”

Recent events regarding school shootings have sparked these walkouts and marches. On Feb. 14, 17 students were killed by Nikolas Cruz, 19, at Marjory Stoneman Douglas High School in Florida. As a result, students, administration, staff, and more are planning on participating in a nationwide 17 minute walkout to honor the 17 victims in the shooting. For this, people will walk out of class to peacefully protest gun violence. Later in March there is also a march, mostly taking place in Washington D.C., but also in other states, too.

Some high schools have been threatening to punish these students who want to participate in these protests. The Needville Independent School District in Texas does not agree with these walkouts, and according to CNN, they’re administration issued a warning suspending anyone who participated in a walkout or another political protest for three days.

“I think it’s crazy that high schools would threaten to give consequences if a student were to protest what they believe,” Catherine Sprouls ’19 said. “I love the idea that we get to speak up and do something but in a quiet and civil way.”

“I think it’s great. Kids get to speak their mind and silently protest, but don’t have to worry about being punished by their colleges,” Mathilda Arvidsson ’18 said. I’m excited for it.”