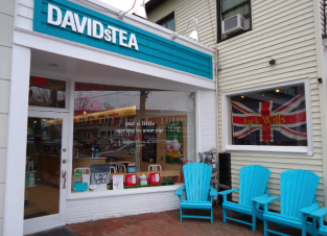 David’s Tea, one of the many outlets where Westporters receive their caffeine, will be closing its downtown location between Brooks Brothers Women’s store and Jack Wills on April 29.

“I went to David’s Tea probably once every two or three weeks, and I went a lot more after I found out they were closing, probably around once a week,” Dara Kissel ’18 said. “The employees were really nice and the store was really pretty. Also, not only did they have super good tea, but they had supplies to make tea at home.”

Opening on October 20, 2012, the David’s Tea Westport location was the 3rd outlet to open in the United States for the Canadian-based chain. The first two were located on Bleecker Street in New York City and Polk Street in San Francisco.

This downtown tea shop was once considered a “summertime staple” according to Westport’s Patch.com. However, Johnny Donovan ’17 recalls this Westport joint to be more “unwelcoming”.

“I used to work at Jack Wills next door, and we used to receive free tea from them. But when a new management arrived, they would not even give us free water.” Donovan said. Donovan recalls another time where he and his co-worker politely asked for four glasses of water, and they were only allowed to take two in order to make sure “no resources were wasted.”

The store sold over 150 different flavors of tea, 70 of them being organic. Out of the 150 flavors, Kissel recalls her favorite flavor being Guava Cadabra. Recurring customer Mia Gonzalez ’20 said her favorite was the Cotton Candy. Gonzalez also commented on there being no other places in Westport to get tea except for Starbucks.

April 29 marks the official date of the closure of downtown Westport’s David’s Tea. However, loyal customers can also purchase their favorite David’s Tea products on their website.

“The other locations are so far away, I probably will not be able to visit them as often as I would like,” Kissel said. “I’ll miss getting my Guava Cadabra tea whenever I’m shopping in town.”