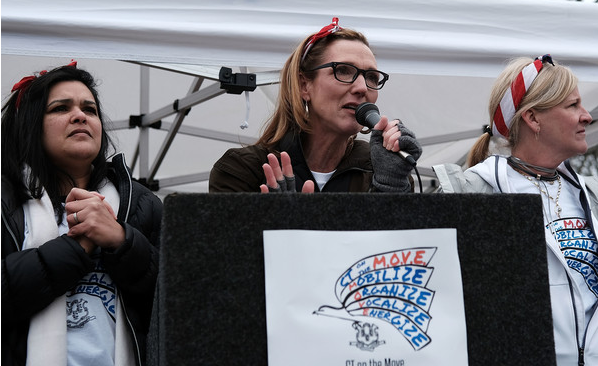 Darcy Hicks and her organization DefenDemocracy, hosted the “CT on the Move, March to Defend the Democracy” event last Sunday, March 26, which began on Jesup Green and ended at Christ and Holy Trinity Church in Westport, which encouraged political activeness, specifically in support of the Democratic party, in the Westport community.

Staples student Eli Debenham ’17, an active member of the Westport Democratic Town Committee, explained that the march was “a locally based extension of the Women’s Marches that have already happened, but also kind of a meeting of minds on the topic of defending democracy and resisting the current administration.”

The march aimed to bring awareness to Trump’s most recent budget cuts, such as eliminating Meals on Wheels and free lunch programs in schools, as well as in support of the recent Women’s Marches that have swept the globe.

“I was inspired by the incredible turnout at the Women’s Marches all over the world, and afterward I noticed that most activism in this town was happening on social media rather than in person,” Hicks said. “I thought about the history in Westport (I grew up here and graduated from Staples), which has always stood on the right side of history, from [abolitionism]to women’s suffrage to civil rights to your own protests about standardized testing just recently.”

Theo Koskoff ’18, Hicks’ son and a member of the Staples Young Democrats, also believes that women are a key component in the future of the Democratic party. “For any structural change to achieve progress, the more power women have the better,” Koskoff said. “This means that if the Democratic party is to undergo serious changes, it will need women at the forefront of those changes if they are to result in any progress.”

In fact, Staples student Sophie Epstein ’17 agrees on the matter. “I think that having an emphasis on women’s rights in these marches is important due to the current political climate and potential defunding of Planned Parenthood,” Epstein said.

Hicks mentioned how one of the main goals of the march, was to form a bigger voice for local grassroots organizations like DefenDemocracy. She hoped that “this march energized our community to get out of our houses and meet, and speak out when we see injustices,” Hicks said. “Change starts this way: small, local movements, local elections, and setting an example for the nation.”

Speaking of change, Hicks’ inspiration came from the historical roots of political activeness in Westport’s history.

“Darcy’s group wondered what their own kids — and others — who are so addicted to social media were learning about activism and social engagement,” Dan Woog’s blog, 06880, said. “They decided that if a group of Westport women could march in 1913 — despite what must have been formidable obstacles — then they could do the same.”

Overall, students and adults alike came out to support the march for its local push to make a change. “It’s incredible how far women have come throughout history and events like this are the push to keep it going even further,” Mikayla Didonato ’17 said. “I have so much respect for women who make the effort to support one another through these difficult times and continue to take the initiative to make a change, which this march represents.”