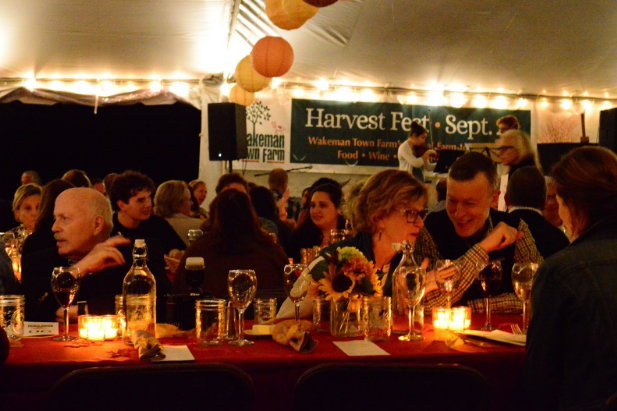 Guest conversing amongst themselves as they wait for the arrival of their dinner.

This fall themed event or “Farm and table sit-down dinner” as Mike Aitkenhead, a teacher at Staples High school and manager of the farm, calls the event, is one of the biggest traditions and fundraisers for the farm that has been occurring every year since 2010. Carlos Baez of The Spread and El Segundo, Alison Milwe of AMG catering, and Tom Romano of Saugatuck Sweets were some of the many chefs who were cooking up dinner and making dessert for the event.
One of the chefs in attendance was Staples culinary teacher and owner of AMG catering, Alison Milwe-Grace. She talked about her personal experience with Harvest Fest. “This was my third year as part of the Harvest Fest and every year I feel the same excitement and connection to the cause. The energy that is created when a bunch of amazing chefs get to work together and taste each other’s dishes creates a contagious positive environment that I love being a part of.”

In addition to the chefs that made an appearance that night, many prominent people within the Westport community were there as well. First Selectman Jim Marpe, and State Representative John Jonathan Steinberg were some of the political dignitaries present. Other important figures included the new head of the Westport Public Library, Bill Harmer, and the executive director at Earthplace, Tony McDowell. Despite their status, these figures were active throughout the night as they helped assist and serve the guest alongside student volunteers from Builders Beyond Borders, National Charity League, Service League of Boys, and other Staples High School students, who helped with setting up and decorating the farm.

While the food and people may have made the event successful enough as it is, “One of the great things about this year’s is that the weather gods smiled upon us, the weather was gorgeous and the reason why that was so amazing was because we were able to have our cocktail hour outside and show off the farm,” Christie Colasurdo, one of the Co-Chairs of the farm, said.
The farm itself is self-funded. In addition to the many programs and workshops that the farm offers, it is through donations and volunteers that it thrives. “This keeps the lights on, feeds the animals and grows the gardens,” Aitkenhead states. However, projects like the goat shed require additional fundings from bigger events like the Harvest Fest.

The overall event seemed to have been a great success according to Aikenhead. “When I had those moments to stop and just kind of take it in, the weather was great, we had our largest crowd yet, this was 240 people when we usually get less than 200, it was a great evening, we haven’t counted it yet but it also seems like we raised a lot of money.”