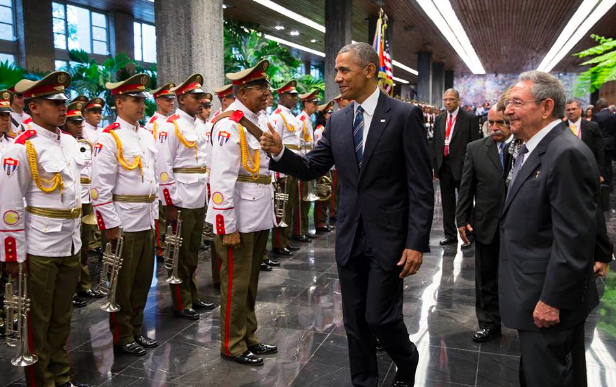 In the recent months many historic strides have transpired to better the relations between two countries that have been at odds for the past few decades. The United States has been attempting to ease tensions with Cuba by hoping to lift the almost five decades long year embargo that has left the island with old cars and barely any access to the internet.

Cuba’s economy has severely struggled due to the U.S. embargo, but once it is lifted both countries economies should benefit.

According to Staples’ student, Harrison King ’16, “If we as a nation can work out efficient and smart trade deals, I think that the U.S. and Cuba can put the past behind, and move forward towards a stronger bond.” King continued, “Ending the embargo is the first step towards strengthening our national image and foreign relations.”

On March 20, 2016, Air Force One landed in Cuba for the first time since 1928. President Barack Obama visited the island in order to open up the Cuban and American relationship and possibly sway Cuba away from communism.

Obama delivered a speech to the Cuban citizens and President Raúl Castro during his visit, “I believe my visit here demonstrates you do not need to fear a threat from the United States. I am also confident that you need not fear the different voices of the Cuban people, and their capacity to speak, and assemble, and vote for their leaders. In fact, I’m hopeful for the future because I trust that the Cuban people will make the right decisions.”

On Monday, May 2, 2016 the first cruise ship to arrive in Cuba from the United States docked, and there are Staples students who wish to visit Cuba in the future. The Adonia sailed from the port of Miami to Cuba with 700 passengers aboard. The Carnival cruise ship will travel every other week from Miami to Cuba.

Carly Crossfield ’16, who has family connections to Cuba, said, “I really want to go to Cuba in the future. I think it would be such a cool experience to see a place that has been stuck in time. I want to go with my grandma so she could give me a first hand experience of everything there; however, she plans to never go back because it would be too sad.”

Crossfield continued, “Imagine leaving your house now, unwillingly, and coming back to your home 50 years later, however, seeing it all broken down and destroyed. I could understand how she would not want to go back. She wants to remember it the way it was before everything turned bad.”

“I think that it is time that the U.S. and Cuban governments come to the negotiating table to end the embargo. Although I am a big critic of President Obama, I think his recent visit to Cuba to better relations was a smart move for our country,” said King.

Most student’s initial reactions to the current relationship between the U.S and Cuba is that it will open trade for both countries and allow the American economy to rise, but Crossfield, now sees a very different side.
“My initial reactions was that it was good to have a relationship with a nation that has been isolated for so long, however when I listened to what my grandmother and father had to say, I saw a different side of the argument,” explained Crossfield. “Most people believe as I did, that it’s good to have a connection with Cuba. However, my grandma’s point of view is that we are establishing a connection with a nation who deprived their people of everything they had. She doesn’t want anything to do with Cuba because of everything that happened.”