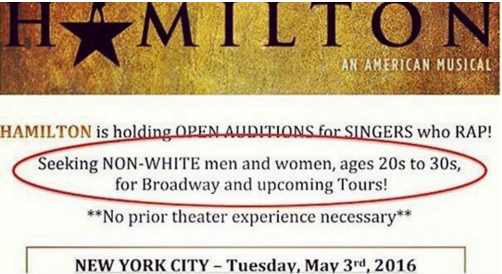 “Hamilton” has received enthusiastic praise from virtually every person who has seen the now sold out musical on Broadway. However, this praise has turned into criticism from theater groups and Staples students alike, after a new casting call seeking “nonwhite men and women” to audition for the show was posted. The show, which  has been running on Broadway since last summer, will have to hire new actors this summer if some of the original cast members choose to pursue other projects.

“Hamilton” chronicles the life and death of Alexander Hamilton, a Founding Father and founder of the Federalist Party. What separates “Hamilton” from traditional tellings of Hamilton’s life is that the actors that play the Founding Fathers are black and Hispanic. Much of the praise “Hamilton” has received revolves around the diversity of the cast, but some believe that the recent casting call for “nonwhite actors” is discriminatory.

Adam Riegler ’16, who saw Hamilton when it premiered at The Public Theater in March 2015, believes that the diversity creates “almost a duality in the story,” but also that the producers should have extended the casting call to all actors, regardless of race. “Because of New York labor laws, no show can actually send out a casting call that discriminates against a race. I am offended by their disregard for the law,” Riegler said.

Similarly, a spokeswoman for the Actors’ Equity, the labor union representing American actors and stage managers in the theatre, believes the casting call restricted opportunities for white actors, and that the Actors’ Equity “Want[s] to encourage that everyone has an equal opportunity to go in and audition for shows.”

However, James Allott ’17 who is strongly against affirmative action, believing that it is a “racist,” “immoral” and “entirely ineffective” program, has no problem with the musical’s call for nonwhite actors. “I believe a private company should be able to hire whoever they want for whatever reasons. If they want to only hire minorities that’s fine,” Allott said.

Similarly, Maria Maisonet ’19 believes that the musical’s decision “to cast people of minority races wasn’t to discriminate white people, rather it’s symbolic for the musical,” and acknowledges that “this specific type of casting opens up many doors for actors who aren’t white because, sadly, many roles for them are stereotypes.”

Despite the contrasting opinions, “Hamilton” has no intention of altering the diversity of a cast. The show’s lead producer, Jeffrey Seller, said in a statement that they will “continue to cast the show with the same multicultural diversity that we have employed thus far.”