Staples seniors share their wisdom on the college process 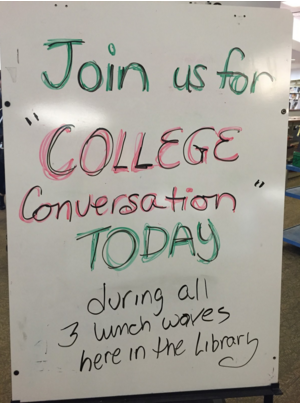 Juniors and underclassmen had the opportunity to learn about the college process during the “Real Talk” conference in the library media center this past Tuesday, April 12th.  Four seniors: Jane Levy ’16, Emily Eldh 16’, Kyle Ratner ’16 and Reece Schachne ’16 shared their personal experiences regarding the process.

The talk, organized by the Westport Youth Commission, included a wide range of topics, including picking the right school, the application process, and writing your college essay. The forum was structured so that students could ask questions to any of the seniors about topics they were either worried or interested in learning about.

Jack Norman ’17, felt that the talk left him well-informed about the college process. “I learned a lot actually, especially about the essay and how people come up with their ideas,” he said.

Jane Levy ’16 shared her own personal experiences about the essay during the talk. “I told the story of how I found my voice as a writer and person,” Levy said.

The seniors emphasized the importance of preparing for college in advance. “If there was one major theme throughout the discussion it was to start the college process early,” Ratner said. “The more things done that you have off of your college to-do list the better.”

In regards to starting the application process early, all seniors were in agreement that applying early decision helps one’s chances of getting into a school however, “It’s important to know that if you don’t know where you want to be for the next four years, don’t apply early,” Schachne said.

For Abby Suppan ’17, the talk made the college process seem less stressful in part because of the calm environment it took place in. “Everyone seemed really happy about where they were going and everyone ends up where they are supposed to be,” she said.

Suppan’s comment proves that the talk accomplished the goals the seniors hope it would. “The purpose of our talk was to provide a comfortable space for students (mainly juniors) to ask any questions they had about the college process.” Ratner said. “Considering that all of us just went through it, we were able to go through our own experiences and highlight things we did well and things we would have changed.”

Overall, the talk appeared to eradicate some of the overwhelming stress that juniors face when beginning the college process. “I learned that even though people may be stressed and overwhelmed, everything works out in the end. I also learned that the process is special and different for everyone, and that just because you don’t meet a standard on naviance does not mean you won’t get in somewhere,” Suppan said.