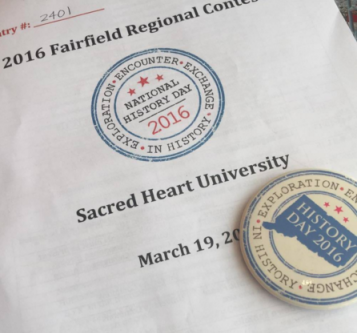 National History Day is a nationwide competition where many students create a documentary, performance, exhibit, website or essay. They could choose any topic in American history as long as it related to this year’s theme of Explore, Encounter and Exchange.

Students arrived at 8 a.m. to register their projects. At 9 a.m. Andrade gave a welcoming speech regarding the schedule of the day and where the students would go next. For the next three hours, students were divided into separate rooms based on their project and interviewed by to NHD judges. The NHD judges were all local historians, educators, lawyers, business people and video producers who are very knowledgeable about American history.

Many Sacred Heart students and members of the Staples Rho Kappa Social Studies Honor Society volunteered at the event. They helped register competitors and get everyone where they needed to go.

There was much variety through the Staples High School projects. Marshall Heiser ’18 described how his topic: “How people were able to profit during the 2008 financial crisis. I focused on one person who made 4 billion dollars by betting against the housing market.”

Other students, including Monique Prior ’18 and Sophie Betar ’18, took a different approach to the project. had a very different project: Monique explained, “Sophie and I chose food additives and their effects on Americans because a lot of people don’t know how bad they are and how they are in everything we eat.”

Rebecca Lee ’18 won first place in the individual website division with her project on “Working Dogs: More Than Just A Pet.” Julianna Beal’s project on Operation Ajax: 1953 Iranian Coup, won first place in the individual exhibit category. Also, Christian Myers ’18 placed first in the individual documentary division with his project on R.E. Olds, a pioneer of the American automotive industry.
In a few weeks, these three students along with eleven other Staples Students will attempt to win the state competition and move on to the national competition at the University of Maryland on June 12 through 16.