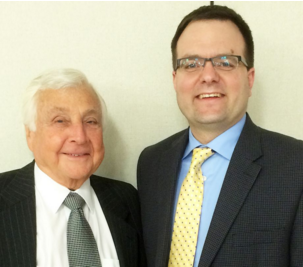 After a coast to coast search for a new principal at Staples, the Board of Education (BOE) finally confirmed James D’Amico, who already sits next to the board members at their weekly meetings.

D’Amico will take over as principal for Staples High School on the first of July and will replace the current interim principal, Mark Karagus, who has been filling in for the retired John Dodig. D’Amico was the Director of Secondary Education at Westport Public Schools for the last two years, and also was previously the Social Studies Department Chair and a teacher in the department.

Many students, including his predecessor, John Dodig, commented on D’Amico’s new role in Westport.

“I was thrilled that he was selected. I remember having a conversation with him a short few years ago about my belief that, some day, he would be a terrific high school principal,” former principal Dodig said.

“Anyone who has worked with him clearly knows that he is very bright and very talented. Over the past two years, he has shown everyone in the district that he understands the power of well thought out curriculum and the benefits of clear articulation from kindergarten through senior year,” Dodig continued.

“I think this principal [James D’Amico] will do a good job since he’s already been at Staples, so he knows what the school is like,” Alyssa Hyman ’18, member of the Staples’ student assembly.

However, some students like Jojo Adler ’16 were startled by the early selection.

“I was surprised because I didn’t even know the school was that far in the selection process but definitely happy.”

The new principal commented on his upcoming position at Staples.

“I just knew that I had to apply for this job, and it’s got to be one of the best jobs in education. And why would I pass up the chance to at least apply for it? And getting it and getting to come back home to Staples is just phenomenal,” D’Amico said.

D’Amico went on to reveal his plans at Staples for the approaching school year as principal.

“Staples is a great place. Our students do really well in a lot of ways: academically, in the arts, athletically, socially. It’s that last piece that I think in my time as principal, which I hope is a long time, we really need to work on,” D’Amico commented. “How we treat each other, how we talk to each other, and how we just manage ourselves and where we are on a daily basis. You can pursue your passions, but do it with a little more community in mind.”

Having over a decade of experience as principal at Staples, Dodig offered some helpful advice to his successor

“My advice to him[James D’Amico] is to never be afraid to let people know his true feelings about the importance of a great teacher in the classroom and the importance of reaching out to every single student who walks into SHS every morning,” Dodig said.