Staples’ We the People secures third 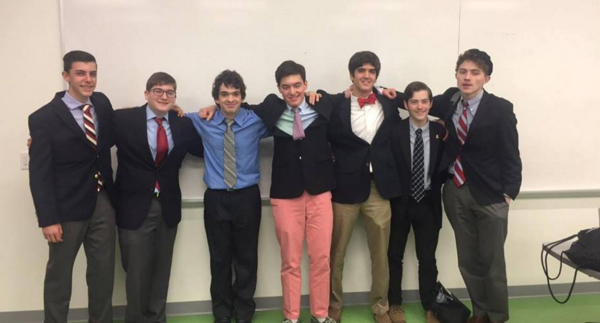 On Friday 12, 2015, a select number of Advanced Placement American Government classes competed in the annual We the People competition. Staples High School scored third overall in the entire competition coming in close behind both Greenwich in second and Trumbull in first place.

The competition consists of each school’s team being split up into six units where each unit is given four minutes of answer question regarding some area of study that they had prepared ahead of time. Immediately following was a six minute question and answer that could have been on anything that was relevant to their topic.

“ I personally was amazed by the brilliance of the performances of many of my fellow classmates,” Christopher Sherban ’17 said. “If I were I judge they probably would have received perfect scores by my mark.”

With four out of those six units were able to take second place in the individual questions, it isn’t hard to see the hardwork that Staples students have put into this competition in the months leading up.

“It was also just really nice to see all of the hard work paying off,” Justine Shikowitz ’17, a current APGov We the People competitor, said. ”Overall, I think we all did a great job at preparing for the competition.”