We The People students participate in statewide competition 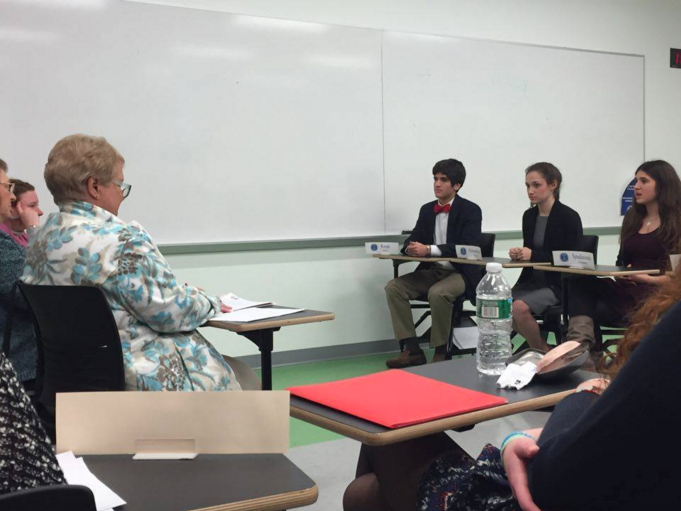 The We The People sections of the A.P. U.S. Government and Politics course recently participated in the We The People competition at Central Connecticut State University last Friday.

We The People is a specialized section of the government and politics course at Staples that designates time away from the curriculum in order to focus on preparing for the required We The People competition. The program entails understanding the contemporary relevance of the Constitution and the Bill of Rights while participating in an intensive question answer response based scenario.

“I remember my entire class being nervous together on the bus to New Britain, but we were all really excited to show all of our hard work to the judges and Mrs. Kammerman,” she said.

Van Arsdale and her group won first place for the assigned unit that they competed for and the rest of the class as a whole scored third in the state.

“The competition itself was really cool, and I am proud of my class last year for doing such a good job,” Van Arsdale said.

This year’s students found a similar passion and success of that of Van Arsdale and her classmates.

According to Kellie Iannacone ’17, the competition entails preparing an oral argument with a group of students to be read to a panel of judges on a specific topic, which is then followed up by a period of “unprecedented question and answers to test your knowledge on the subject.”

“It was a really fun experience,” Iannacone said. “We spent so much time with our group members [that] we were able to form good bonds and have fun as a class.”

Another student,  Jane Handa ’17 describes the elements the students underwent during their preparation.

“The competition involves [reading a] four minute statement we had prewritten, as well as answering six minutes of follow up questions,” she said.

According to Handa, the class had a positive experience and did well during the statement reading and question answer piece of the competition.

Four out of the six groups of students came in second place in their own individual units while Staples placed third overall, behind Trumbull and Greenwich.