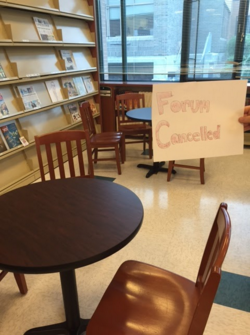 The Board of Education has recently announced that this year’s principal candidates will not be introduced to the public before they are hired. Students and parents will no longer be able to attend a forum to ask questions and learn more about the candidates.

Traditionally, there are two forum: one is in the morning with the parents, and the second is during the student’s lunch waves. During these forums, the candidate will be asked questions to better understand their philosophy and approach to teaching.

Many students and parents have mixed feelings regarding this topic. Some of them agree with the change, saying that it is not the job of the community to decide; the superintendent should be trusted enough to hire a principal.

“To have an open parent forum feels more like a witch hunt than community participation,” a Staples parent said.

Some of the students, however, feel differently. They claim that it is better with the forums and the search won’t be as thorough without them. A few said it “sucks” that there is no longer an open forum.

“To just disregard what the community has to say isn’t the best route to take,” Monique Ostbye ’18 said.

Monique Ostbye thinks that after former principal John Dodig, the new principal has a lot to live up to, and the community expects the best. Others agree with her opinion that everyone should be able to voice their beliefs.

“I think everyone should have equal power — between the school board, and the teachers, parents and students,” Charlie Colasurdo ’18 said.

Most students have the same ideas when considering this topic. They stress how important it is for the community to have input regarding the new principal.

“I believe that parents should have a say, and have the right to ask questions and so forth, in who is the [new] principal,” Anniina Haka ’16 said.