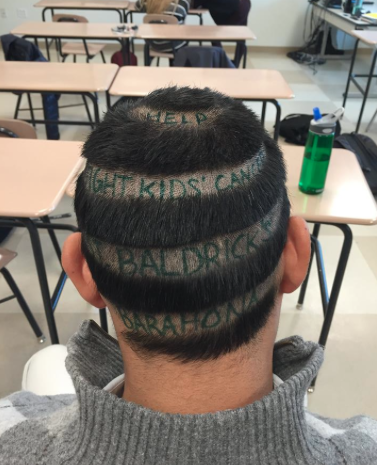 For the most part, world language classes, including Spanish classes, mean a ton of lessons about conjugations and lots of new vocabulary. However, there’s a certain chemistry in Señor Barahona’s period four Spanish 5A class that makes it stand out from the crowd.

Ben Rogers ’15 explains that this chemistry is what encouraged Señor Barahona to choose this class to make his long-awaited music video to raise money for childhood cancer.

“Señor has been saying that he has wanted to do this for many years and that he thinks this is the right class to do it with,” Rogers explained.

The idea was turned into reality when students in the class showed Señor Barahona a viral video of students dancing to the song “Uptown Funk” by Bruno Mars, while looking for ideas for a Spanish grammar video on the subjunctive tense.

The video inspired the students and Señor Barahona to work to create a similar music video, but to the tune of the Red Hot Chili Peppers song “Give it Away” that would not only be based on the subjunctive tense, but also would have a greater purpose, to raise money for childhood cancer by donating to St. Baldrick’s. The only catch would be that Señor Barahona would cut cut his hair in the crazy style that Flea has in the music video in order to encourage donations.

Señor Barahona expresses his initial reluctance, but explains that he is dedicated to the cause wholeheartedly. “It sounded crazy at first but then we figured if I could raise money for children’s cancer by doing it, I would,” he says.

Several students in the class, as well as Señor Barahona himself, also have a personal connection to the cause. Several members of Señor Barahona’s family have been affected by childhood cancer, such as his cousin Gus and his 2-year-old niece.

“I hope to do some good and raise some money the help fund research,” Barahona says. “I think it would be nice to have my Spanish 5 class create a fantastic grammar music video while helping out a great cause.”

Everyone in the class is very connected to the cause, and extremely enthusiastic about the video.

Shannon Cardoza ’15 expressed her excitement. “It’s gonna be so sick,” she says. “I’m so excited. I hope our video goes viral. That would be dope!”