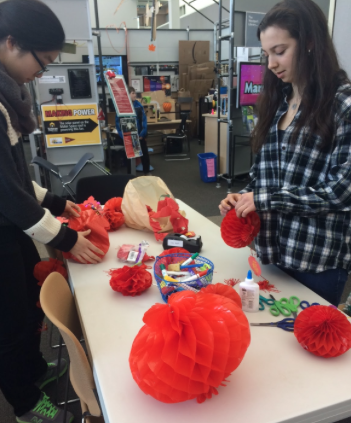 Chinese language students, teachers and townspeople gathered at the Westport Library on March 7 to celebrate the Chinese New Year. The festivities began with traditional food and gamesand were  followed by lantern making.

The event was set up by the Chinese National Honor Society, and students enrolled in a Chinese course were able to  earn extra credit for attending. Also, it was also open to the public.

“The food was delicious,” Charlie Colasurdo ’18 said. “Especially the dumplings and fried rice.”

After the lanterns were decorated, students walked them down to the river. Traditionally, they would then be released, but due to environmental policies, students were encouraged to bring them home instead.

“I put glitter glue around my lantern filled with LED lights. In traditional culture, these lanterns are supposed to warn off bad spirits,” Sophia Call ’16 said.

The room was full of red, symbolizing good fortune. Origami was scattered around the table amongst various card games all in the native language. Students enjoy learning about other cultures, and this served as an application that paralleled topics covered in class.

“It’s really important to learn about other cultures, especially when there are people from those communities living around us,” Reni Forer ’15, a student of Chinese for the past four years, said.

Westport strives to host events that inform students about the world around us, and this was just one of them.