Karyn Morgan is crowned assistant principal of the year 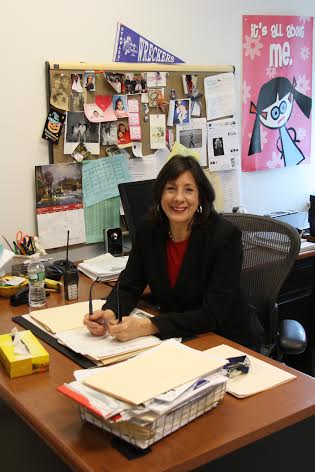 The Connecticut Association of Schools (CAS) announced that Karyn Morgan, Staples’ assistant principal to the junior class, has won the title of 2015 High School Assistant Principal of the Year.

According to the CAS website, the Assistant Principal of the Year Award was created in 1990 to give recognition to assistant principals that have exceeded expectations for their position in helping provide a quality learning experience for students. Candidates for the contest must be officially nominated by a colleague.

Principal John Dodig describes the honor as “an opportunity for [the] organization to acknowledge and showcase people in our profession who have for some reason been extraordinary.”

Dodig referred to Morgan’s 37 years of experience in education, starting as a special education teacher in Bridgeport, as a strong basis for her impact at Staples.

“Of course, she deserves this award,” Dodig said. “Because of her background in special ed, she asked if she could start and assist in multiple programs aiding students who may be struggling academically. Time and time again, when there’s been a need, she steps forward and says, ‘Let me do it.’”

When Morgan first learned she had received the award back in November, she said she “couldn’t speak.”

“I was just shocked and truly humbled by this,” she said. “The position of an assistant principal is not sincerely recognized as much as it should be. I’m glad that the state is making an effort to change this.”

Morgan’s level of recognition may not even end here. Representing Connecticut, she will compete against her equivalent in all 50 states and the District of Columbia for the National Assistant Principal of the Year Award in April.