Students and police play together in Dodge-A-Cop 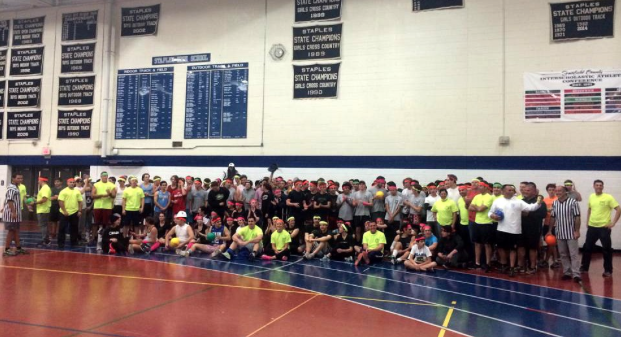 The gym was flooded with shouts and cheers as rubber balls soared across the gym, students sidestepped and sprinted to avoid getting hit; tensions were high and the competition was intense. But this wasn’t an ordinary dodgeball game- among the sweating students, police officers were playing too.

One hundred and fifty-five students and 18 police officers gathered in the field house Tuesday, Nov. 26  to run, throw and duck their way to victory in the third annual Dodge-A-Cop.

During the event, students created teams of five and were assigned a cop to play on their team, competing for various rewards, which included gift cards to Five Guys, Qdoba and Sakura.

“Winning felt unbelievable,” Vishno said. “The final game was intense, but our team chemistry was too much for the other guys and we came together to get the win.”

An additional reward of a Five Guys gift card was given to the Young Republicans team – Nicolaas Esposito ’15, Ian Palmer ’15, Trevor Penwell ’15, Bailey Ethier ’15 and Sam Gasway’15 – for being best dressed. They all donned shirts that read “Reagan, Bush ’84.”

But Dodge-A-Cop isn’t just for the prizes. Officer Batlin says, “The purpose is to have kids and officers working together to have fun, and for the police to get to know kids.”

Kyle Ratner ’16, who is a part of the town committee that organizes the event,added that it “gives kids the opportunity to see police officers beyond their uniform.”

Not only is the event for fun, but it is also for charity. The teams pay to play, and 100% of the profits go to Homes with Hope, an organization that helps combat homelessness.

Overall, Dodge-A-Cop was received with lots of positive feedback from students.

“The energy was great and I can’t wait to do it again next year,” Vishno said.