Elaine Whitney resigns as chairwoman, remains on Board 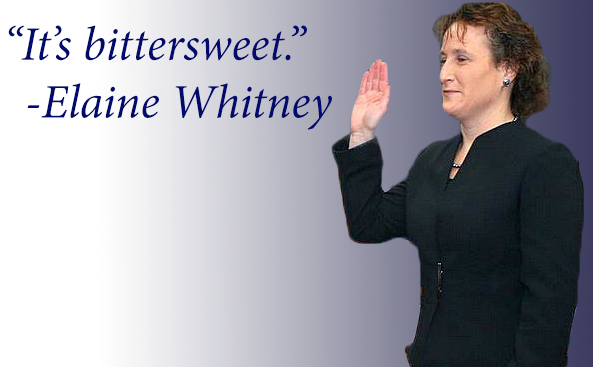 Elaine Whitney, a Yale and Northwestern alum and a resident of Westport for over thirteen years, has stepped down as Board of Education (BOE) chairwoman. She held the position for the last two years.

On Nov. 17, at the school board’s annual meeting, Whitney formally announced her resignation. She plans to devote herself to her career in healthcare strategy and policy, where she has worked for over a decade.

Michael Gordon was elected the new chair in the Nov. 17 meeting, nominated by his peers, Mark Mathias and Jeannie Smith. Gordon’s wife and three kids were in the audience.

Whitney has “unmatched wisdom, commitment, and graciousness,” Gordon said. “All of us in Westport are better off [for her service].”

As chairwoman, Whitney prioritized a balanced budget. During her term, Westport had the lowest operating school budget in over a decade. Her priority was fiscal responsibility, as well as multidisciplinary learning and innovation in the classroom. Singapore math, the innovative teaching method emphasizing mastery over memorization, was introduced to Westport elementary schools. Whitney was also behind the twenty-first century learning skills implemented at Staples, a program highlighting creative and critical thinking skills, collaboration and communication.

In her announcement, Whitney expressed her mixed emotions on her career shifts.

“I am bittersweet,” Whitney said. “I am very excited to renew my professional life, but I do find serving on the board very, very exciting.”

Whitney will remain on the board as newly elected secretary, nominated by her 2012 Democratic running mate Brett Aranow.

Whitney is a “unique asset to the board,” Aranow said.

Republican board member Jeannie Smith agreed, and seconded the nomination for Whitney as secretary.

Whitney is the daughter of a former Westport teacher, and a mother to three children, two of whom are current students– an eighth grader at Bedford Middle School and a sophomore at Staples.