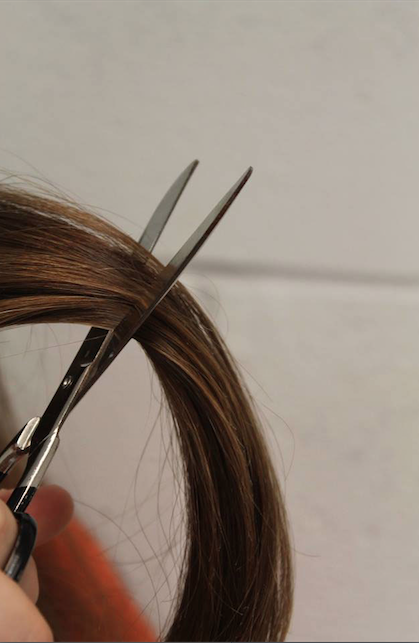 As toddlers, most little girls have donned short ’dos. Since then, their hair may have grown longer, been braided, had hair tinsel added or gone through the cycle of lather, rinse, repeat numerous times. Through it all, some Staples girls have recently gone back to their short-hair roots.

The short hair trend has taken Hollywood by storm. Celebrities like Jennifer Lawrence, Miley Cyrus and Emma Watson  have departed from their long locks to sport shorter hairstyles like pixie cuts and bobs. A photostory in Glamour Magazine recently showcased 52 celebrity women who also cut their hair. Now, Staples students have joined the trend.

“I stole the idea of cutting my hair short from Jennifer Lawrence and Kylie Jenner,” Carolynn van Arsdale ’16 said. “I loved how they had the confidence to cut off a majority of their hair. It made me want to go for it, too.” When Tova Byrne ’15 opted for a pixie cut, a hairstyle defined by closely-cropped layers on the sides and back of the head, she was similarly inspired.

“I wanted to do it for so long and would always admire it on other people,” Byrne said. “I woke up one day, like, if I don’t do it now, I’m never going to, and just went without telling anybody.”

After the hairdresser cut her ponytail off, Byrne sent a picture to her friends before getting the rest of the haircut. She came back to 50 texts that read, “What did you do?”

Byrne said that cutting her hair was about being different. She said that what she lost in hair, she gained in confidence and a sense of defining who she is.

Others have sported a shorter cut for more practical reasons.

“I want to spend very little time with cold, wet hair,” Audrey Seo ’16 said. “I really don’t miss having long hair because it’s fantastic to not have it weighing my head down at all hours.”

Van Arsdale added that it was more challenging to keep her old, longer hair healthier because it was harder to watch for split ends and wash. Grace Summerfield ’15 agreed, saying that it was “just easier” having short hair.

Despite the growing popularity of the short hair trend, some students still prefer to keep their longer hairstyles. Camerin Elkin ’15 said that she prefers long hair because there are many hairstyles, such as a fishtail braid, that don’t look as good with short hair.

However, Staples students who have already clipped their hair encourage others to join in.

“Short hair on girls is frequently thought of as ‘tom-boyish’ or ‘rebellious,’ but more than anything, it’s just hair,” Seo said. “It just so happens that short hair is super convenient, so perhaps more people should be taking advantage of that.”

Van Arsdale agreed that taking the risk of cutting her hair has paid off, and that anyone who chooses to do the same exhibits confidence and style.