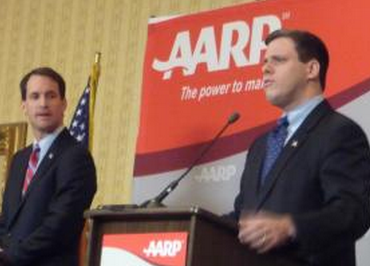 The election for Connecticut’s fourth congressional district race between democrat Jim Himes and republican Dan Debicella will be held on November 4th; students with summer internships in local politics await their campaign’s results.

Jim Himes, a moderate democrat, is seeking his fourth straight term in office, while Debicella, a former state senator from Shelton, campaigned and lost to Himes for the district in 2010. The two candidates will debate three times this month in neighboring towns.

Several Staples students have gotten involved with local politics in recent years. One student who interned for Himes this past summer, Olivia Jones ’15, said she is “fairly interested in the election [now], but mainly because of [her] involvement in the campaign.”

She explained how she came across such a unique opportunity and said that it all started with a previous internship with the Garten-Kane campaign last fall.

Nora Cowherd ’15 also interned for Congressman Himes, which she said involved “calling voters and rallying volunteers,” among other things.

When asked what led her to pursue the job, and if the internship with Himes aligned with her own political views, Cowherd said, “I felt that interning for a congressman would give me a new outlook on our government. I am also very liberal in my ideals and want to do whatever I can to make sure a congressman who has a similar ideological view is elected to office to represent this district.”