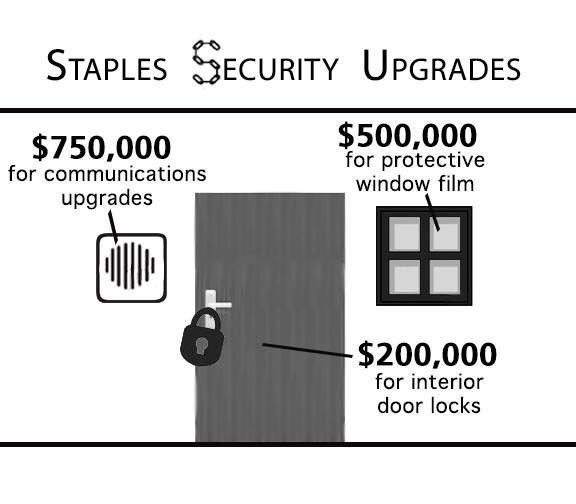 In response to the Sandy Hook tragedy, Westport public schools implemented this summer the first half of the Board of Education’s (BOE) $1.4 million plan for school security improvements.

Part of this plan includes automatic interior door locks, which is why any student who leaves for the bathroom can’t get back into the classroom unless someone opens the door for them.

Another change is the bullet-resistant film that now coats all ground-floor windows. The locks and the film combined for a total cost of $700,000, offset by about $260,000 of state reimbursement.

These projects stem from the $100,000 audit conducted last September by Kroll, a security company. Westport has conducted similar audits in the past and according to BOE Chair Elaine Whitney, it was time for an update anyway. This time, the difference was just in the scale.

“We choose to conduct a much more comprehensive audit with Kroll than we had done in the past due in part to greater general awareness in the wake of Newtown,” Whitney wrote in an email.

Now, the BOE is looking to implement the final piece of physical security improvements: $750,000 of improvements for the schools’ communications system, including an upgrade to the loudspeaker system and enhanced connectivity with law enforcement.

While the Board of Finance (BOF) approved the appropriations for the locks and window film, they recently decided to defer the decision about the communications upgrades until they had more details about the project.

Lasersohn pointed out that the nature of security projects has somewhat restricted public discussion. Because the results of the Kroll audit could expose weaknesses in school security, it has only been reviewed by the BOE, the fire and police departments and some administrators, but not the BOF.

Lasersohn appreciates and agrees with the safety concerns, but notes that they limit the BOF’s ability to understand the reasoning behind the expenses.

“Because the BOF hasn’t reviewed the Kroll’s report, we are really relying on the judgment of the Board of Ed, the administration, the police, and the fire departments when approving  appropriations,” he said.

Westport is not the only town moving forward with school safety projects. In the aftermath of Sandy Hook, many Connecticut schools are tightening security. Bridgeport schools saw upgrades to security cameras, and Danbury placed unarmed “safety officers” in their elementary schools.

Some students doubt the need for this kind of security in Westport.

Principal John Dodig said that measures like locks and cameras can help, but pointed out that physical security is only part of the battle when it comes to school safety.

“If someone really wants to do harm, they could drive their car through the front door and the film is not going to stop it,” he said. “That’s why, when I talk about this subject, my emphasis is on knowing our kids.”

Whitney agrees with that priority, saying that the BOE is focused “first on prevention, next on deterrence, and then on delaying anyone intending to cause harm…until law enforcement can arrive.”

Dodig believes that the best way to prevent an attack is to recognize an unhappy student and offer to help with the situation early. He said Staples is fortunate to have resources like a full guidance department plus psychologists, social workers, and nurses who can provide that kind of help.

“I believe that…if something horrible was going to happen, [students] would tell somebody,” he said. “Maybe I’m naïve…but I have such a positive feeling about this school and the relationship the adults have with the kids.”