The motive behind no laptops 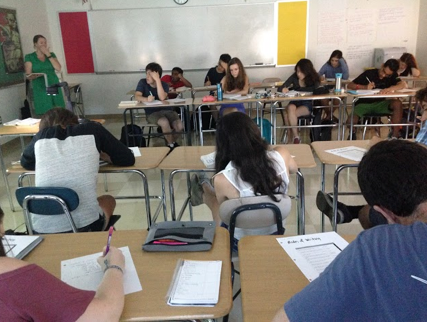 It’s back to good old fashioned pencil and paper. The arrival of the new school year has brought a slight change amongst many teachers, particularly in the English department, regarding their policies on allowing laptops in class.

For English teacher Amanda Morgan, laptop use in class has always been a frustration.

“In past years, I have found that no matter the grade or level, there were always problems,” Morgan said.

Likewise, English teacher Meghan Scheck says she’s never been a fan of laptops in class. Scheck attributes her support for her new policy to a study conducted in 2013 about the cognitive effects of taking notes on laptops.

According to the Chronicle of Higher Education, the study has shown it is nearly impossible not to multi –task, even if the user does not intend to. “Once we are on email/the web, we are no longer paying very good attention to what is happening in class.”

The study also suggests that taking notes by hand greatly improves the retention of information.

In the study, “the students taking notes by hand had to do more synthesizing and condensing as they wrote because they could not get everything down. As a result, they learned the material better.”

Scheck explains that “after conducting much research on the topic, I came to the conclusion I would follow the policy. I was unable to find sources that said it was a good idea to take notes on a laptop.”

Students also seem to be aware of the benefits of handwriting their notes.

Sydney Sussman ’15, a student of English teacher Christina Richardson who does not allow laptops in class, agrees with the studies. “[hand writing notes] helps me retain information that I may not have retained otherwise,” Sussman said.

On the other hand, Lauren Reedy ’15, another student of Richardson, says she prefers taking her notes on a laptop. “Typing allows me to type what is written on the board and listen to what the teacher is saying at the same time,” Reedy says.

While Reedy understands the benefits of taking notes by hand, as well as the negative aspects of taking notes on a laptop, she “thinks students should be allowed to use a computer in every class and it should be their decision whether or not they will use it productively.”