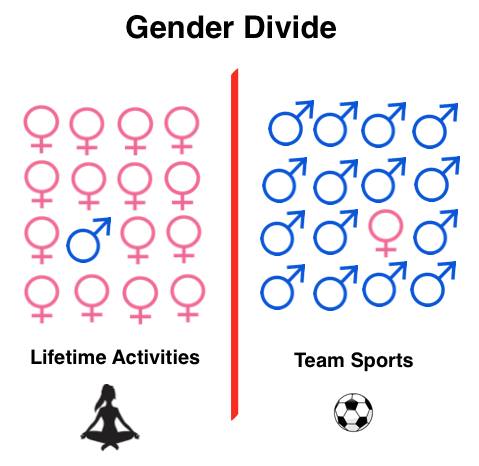 As the year began, it was refreshing for juniors in the new Lifetime Activities gym class to find themselves skating, chasing, and laughing with friends in their rollerblading unit, rather than dripping in sweat and running around the track in a regular gym class.

Many students were surprised at the flexibility of the curriculum. The class runs like a democracy where students vote on what they want to do throughout the year.

“I was happy to hear that we would get to vote on the activities we wanted to do,” Izzy DeRocco ’16 said.

Other students were excited to discover that Lifetime Activities offers stress relieving methods such as meditation and yoga.

“School is stressful, so it is nice to have a relaxing period,” Sam Kann ’16 said.

However, juniors couldn’t help but notice the gender divide between the new gym courses, with the majority of girls taking Lifetime Activities and the majority of boys taking Team Sports.

According to James Banbury ’16, the gender divide is “negative” because it “discourages one gender from taking the unexpected class.”

Kann, who knows boys who have been made fun of for taking Lifetime, says there is an undeserved stigma attached to guys who sign up for the class. Kann herself also admits that she would be “intimidated” to take Team Sports.

Some students don’t think the gender roles are constraining and feel free to make the choice between the two gym classes without taking gender into consideration.

“I think there is a big separation between the genders,” Sam Galvao ’16 said. “But there are a bunch of people in our grade that took a class girls or boys normally wouldn’t take.” Galvao chose to go against the gender divide and enrolled in Team Sports.

When it comes to the division in genders, “I don’t think there is an issue as long as everyone is doing activities that they like,” Katharine Smith ’16 said.