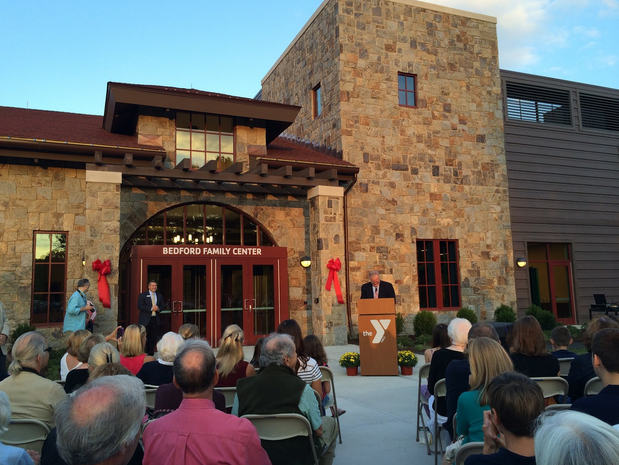 YMCA staff dressed in royal blue lined up at Mahackeno anxiously awaiting the ribbon cutting to unveil the new YMCA. Members, town officials, and curious civilians were crowded outside the new facility known as the Bedford Family Center.

The Bedford Family Center is still awaiting approvals to receive its certificate of occupancy but is due to open in September.

The event started off with a dedication prayer from Pastor Jeff Rider, of the Greens Farms Congregational church, the same church from which a pastor blessed the downtown YMCA when it opened ninety-one years ago.

Later spoke John McKinney, state minority leader, who is also on the Board of Trustees of the YMCA. McKinney is a fifth generation Bedford whose great great grandfather, Edward T. Bedford started the downtown YMCA, bought the land for Mahackeno and is the namesake for Bedford Middle School.

“We were always told through our family that it wasn’t just about giving back to your community, it’s actually about building a community, and this Y has been a part of building an amazing community in Westport for generations.”

Head coach of the Water Rat Swim Team Ellen Johnston, has been coaching at the YMCA for twenty-eight years, has seen the entire production through.

“I’m still just in awe of looking at this pool and just smiling. How can you not?” Johnston said of the new aquatics facility containing four more lanes than the current YMCA. “I think it’s just wow. It’s kind of like having a new toy to play with.”

Although the YMCA didn’t start construction until February 2013, the process started decades earlier.

“I feel like I came in at the tail end and I’ve been here nine years,” said Shin Miyoshi, chief financial director. “People have been here for fifteen to seventeen years to get this project done, and to see the joy on their faces gives me all the pleasure because I helped them reach their goal.”

“I’m excited to see how this new Y progresses to one of the best Y’s in the country. It’s going to be a fun time to watch it do very well,” Wiederecht said.