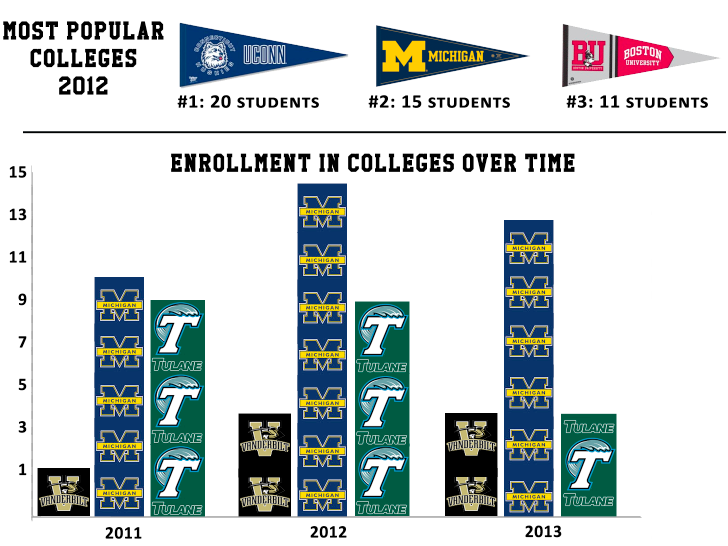 An infinite variety of factors attracts seniors to colleges, from warm weather to delicious food to a diverse community.

But every year, certain schools emit what can only be described as a magnetic pull towards Staples, and an extra-large batch of seniors gravitates towards them at full force.

The most sought-after colleges nationally are very different. In the fall of 2012, the  colleges receiving the most applications were mostly located in the California area, with number one being UCLA at 61,564 applicants, and others outside California including Penn State and St. John’s University. On the other hand, colleges with the lowest acceptance rates were Harvard University and Stanford University, both at around 6% acceptance, according to US News & World Report.

Although some of the schools popular amongst Staples students have retained high enrollment, some radically new trends have emerged amongst the class of 2014.

This year, ten Staples seniors have committed to Vanderbilt University, whereas only one student enrolled the year before, and only four enrolled in 2012.

But what exactly made Vanderbilt such a main attraction for this year’s Staples students?

“I chose to commit to Vanderbilt because of its location and overall feeling of balance. It’s an amazing school academically but also has the school spirit that I wanted,” Brittany Silver ’14, said. Silver believes that other students were similarly enticed by Vanderbilt’s academic reputation, as well as the thrill of Mr. Commodore and lively football games.

Additionally, from the college’s view, Vanderbilt’s student population last year was comprised of only 6% students from the New England area. A hefty-helping of Staples seniors may have given a boost to those numbers.

Another school, Duke University, has seen an equally surprising jolt in Staples enrollment this year, with seven students attending, up from four both in 2012 and 2013.

Duke-bound students like Katie Zhou ’14 also had plenty to say about what made Duke shine above other colleges.

“The people [there] are really energetic and passionate,” Zhou said. “The resources that are available to undergraduates at Duke and in the ‘research triangle’ region of North Carolina are really outstanding, especially for a pre-med, which is what I want to pursue.”

With the massive disparities in student body and college preferences every year, it can be difficult to pinpoint the causes of such dramatic fluctuations. Head of guidance Elaine Schwartz emphasizes that her department tries not to let ideas like the “popularity” of a school influence student decisions.

However, Schwartz said that of course countless factors can influence students’ college preferences. She believes that oftentimes the strongest influence can be something as simple as just one student loving a school and coming home to gush about his or her experience to other students.

“It’s similar to getting a recommendation for a good doctor,” Schwartz said. “Students think: ‘If they’re happy, and I’m similar to them, I must be happy.’”

Schwartz also noted, as many students speculate, that college representatives can largely impact the process.

“We have over 200 college representatives, and wonderful relationships with them,” Schwartz said. “Many of those people read our students’ applications, and it makes a huge difference.”

Whatever the reason, students attending these Staples-heavy schools next year convey mixed feelings about how their college experience will be impacted.

“Honestly, I don’t love the idea of going to school with so many others from Staples,” Silver admitted. “It’s almost like high school is trying to follow me at a time when I’m so ready to be done with it.”

However, others like Jess Riniti ’14 disagree. She will attend University of Delaware, another popular University with seven Staples attendees.

“The school has 16,000 kids, so most likely we’ll never see each other,” she said. “I think it’s great that so many people find it to be the right school for them.”

Duke-committed Nick Vega ’14 takes it even one step further. “It’s a great group of kids going down to Durham. I think it will be relieving to be familiar with some of the faces around campus,” he said.