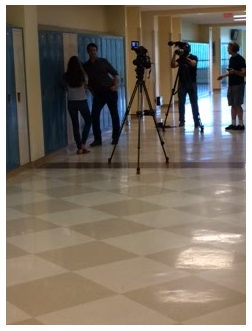 On Tuesday, June 10, 2014 the Al Jazeera America News Network could be seen filming students in Staples for a piece about social media and Yik Yak.  According to Principal John Dodig, the school was contacted after being identified through Staples Senior Will Haskell’s article in The New Yorker, however, Staples is not the only school being featured in the piece.

Though Dodig was contacted directly by the news network, he also received permission from Superintendent Elliot Landon before allowing the network to film in the school.

“It gives me a chance to spin the situation in a positive light,” said Dodig.  “I can show how good Staples students are and show that [the situation with Yik Yak] was just a blip in time.”

Though Dodig can both see benefits to the piece,  not all Staples students think its necessary. Jon Maragos ’16 said he’s sick of hearing about Yik Yak.

“It [Yik Yak] happened for two days,” said Maragos. “The last thing we need is to give it more attention.”

Though cameras were filming in nearly every hallway today, students hoping to make their TV debuts will be out of luck –  anyone filmed will either be blurred or shown only from the knees down.  However, students were not notified in advance about the presence of cameras, leaving some feeling uncomfortable.

“I was walking through the hallway alone and they were just filming me,” said Ruth Kissel ’16. “It was really creepy.”

Despite some discomfort in students, social studies teacher Cathy Schager sees the importance.

“[The piece is] trying to get an idea of what it looks like in the schools because obviously so many people aren’t in a high school environment and that is where so much of the damage is being done,” said Schager.