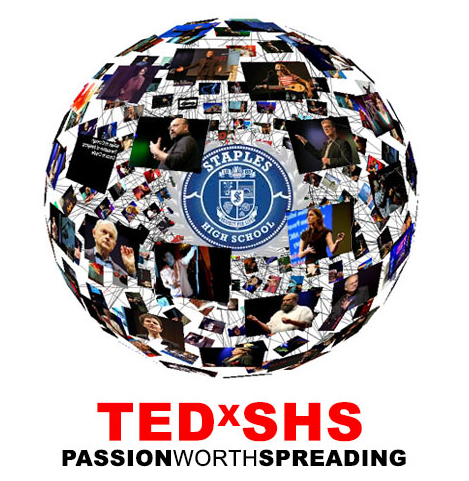 A group of Staples freshmen advocated a different way of thinking on Saturday, May 31st when they launched Wisps of Smoke, TEDxSHS, an assembly of 12 speakers who centered their talks around one topic: passion.

“People do a lot of things with just the letter grade in mind…It’s important that people do what they love,” said Claire Dinshaw ’16, the leader of the project.

TEDx events are local offshoots of the famous TED talks. They can feature actual TED talks, but they are organized entirely on the local level, in this case by Staples freshmen who started working about four months ago, mentored by social studies teacher Ashley Gayanilo.

The preparation involved raising funds, finding speakers, designing logos, and painting sets on Memorial Day. By the time the talks started at 1 p.m. in the Staples auditorium, they had everything ready: 12 speeches, t-shirts, lighting, slideshows, and—most importantly—hot sandwiches from the Grilled Cheese Eatery for the intermission.

Before any of this, however, they needed a theme for the speeches. They chose passion, inspired by the grades-motivated environment they have seen at Staples.

“There’s a lot of doing things to make money or because we have this ideal of wealth and wealth as happiness. [The TEDx] plays into almost the antithesis of that, that in order to be happy you need to find your passion and find what you love,” team member Arin Kaye ’16 said.

To truly explore the concept of passion, the team looked to cover a diverse array of topics. Saturday’s subjects ranged from prime numbers to letter writing to the tragedy of Sandy Hook.

In addition to two pre-recorded TED talks, there were ten live speakers who included two students, English teacher Anne Fernandez, a scientist, an entrepreneur, and a man supporting a school in an impoverished Kenyan village.

Social studies teacher Cathy Dancz-Schager, who acted as host for the event, said TEDxSHS not only covered many important ideas, but also exhibited the incredible people who are part of Westport.

“For us in Staples, we are very much in the bubble of the school, and so what we aren’t aware of is how much is available to us in the community,” Schager said. “I think [the talks] are a community-building event.”