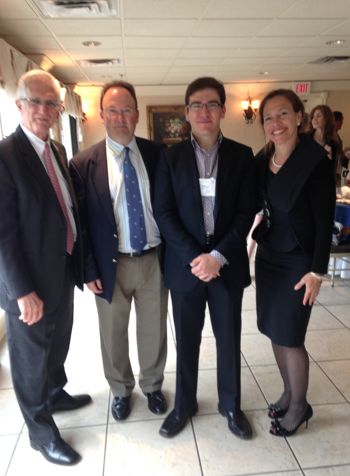 On Thurs. May 22, Everett Sussman ’15 along with 29 other Connecticut students was celebrated in a luncheon as a Governor’s Scholar.

A governor’s scholar is “a student that has demonstrated academic rigor and leadership throughout high school, as well as awareness to global events” according to Sussman.

To be selected, a guidance counselor selects one junior (who ranks in the top five percent of his or her grade) from a school. An application package is then sent to the state, including a one-hour essay on a secret topic generally about a global societal issue, along with the student’s GPA, CAPT scores, SAT or PSAT scores, and class levels and rank.

According to the Connecticut Association of Schools’ website, members of the Governor’s Scholar Committee, who are “professional educators throughout Connecticut,” judge these applications on a composite score basis. With all the attributes combined into a single “score,” the 30 highest become Governor’s scholars.

And they receive an award as well as a wonderful meal along with fellow scholars. Sussman calls the luncheon “really splendid,” with delicious food and an impressive array of speakers. All of the other scholars from Connecticut were very interesting and had a variety of interests, Sussman says.

Just a few weeks ago, Sussman was announced the winner of the district finals of the Rotary Club’s Four Way Speech Contest.

Sussman is humble and attributes his success “to the entire Westport Public Schools system, as I have been granted all of the opportunities needed to quench my interests, explore new fields, and create.  These opportunities have helped shape who I am today.”