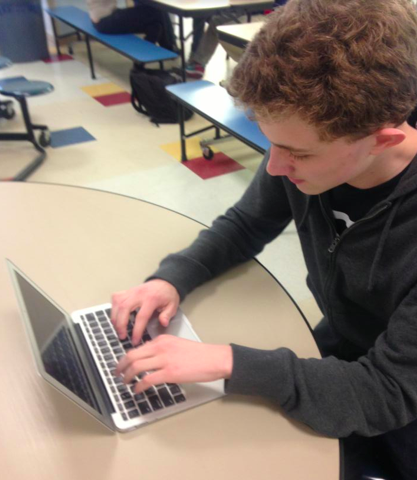 George Menz ’16 is hard at work on his National History Day Project.

For their first year of attending National History Day, Staples High School sophomores have returned home with an abundance of impressive awards and possibly more to come at Nationals.

National History Day requires students from all over the states to either create a paper, exhibit, performance, documentar, or web site about a topic regarding their state’s history.

Most students entered the district competition, and thirty placed either first, second, or third. Those who placed at the State competition on the 26th of April will attend Nationals in Washington D.C, on June 15-19.

Sara Pinchback and Lauren Francese, teachers of U.S history honors classes, decided they wanted to compete this year for the first time. They say they’re pleased for the students moving onto the national level.

“I’m excited that students will get another chance to revise their work and take it to the next level,” Pinchback said.

Students urge the teachers to incorporate it into the curriculum next year too.

“I believe that they should compete next year because it allows you to really grasp the understanding of History,” Maddy Fodor ’16 said.

Honors classes have been working in class on their projects for over two months and students that made it further in the competition have put in extra hours out of school.

Angela Yu ’16 said her and her partner, Fodor spend nearly a month researching their topic.

“In February, we visited the Prudence Crandall museum in Canterbury. We interviewed various people, including the museum curator, and created a short video that went along with the exhibit,” said Yu.

Alex Suppan ’16 said she learnt valuable information from her project.

“I saw the opportunities that could arise from National History Day which was really made it important to me.”