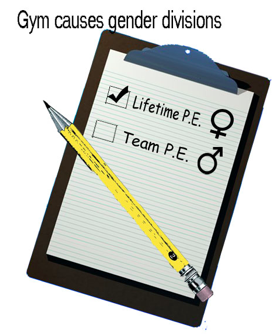 For several weeks, students have been selecting classes. Honors or A? Culinary or drawing? And for sophomores this year: lifetime or team physical education?

Guidance counselor Deborah Slocum said that the choice is gender-divided, with most boys choosing team and most girls deciding on lifetime; for many, the split is based on friends rather than the classes themselves.

“I’m not sure that most kids have even looked at what’s offered between the two,” Slocum said.

However, people choosing based on their friends’ decisions defeats the purpose of having a choice. P.E. Department Chair David Gusitsch said that the meaning behind creating a choice in the first place was so that students would be more engaged in class.

But some students have gone against the crowd because of their own preferences.

Melissa Alvarado ’16 is one of these students.

“I’m pretty sure everybody told me to do lifetime, but I was so stubborn on doing team,” she said. “It will [also] take me out of my comfort zone and make me talk to boys.”
Anna Eichorn ’16 made the same decision, and is excited to be in team.

“I’m not too worried about the gender ratio because I’m going to be playing the type of sports I really enjoy,” she said.

Other students, such as Harry Garber ’16, chose simply because they didn’t want to do the other option.

“I like the fact that there’s a choice mostly so I don’t have to spend time in a useless class like exercise science,” Garber said.

However, in the end, the gender-split prevails.

“I guess I feel a little sad that girls who want to do team don’t take that option because they would only be the one or two of the gender,” Slocum said. “It’s a bummer.”