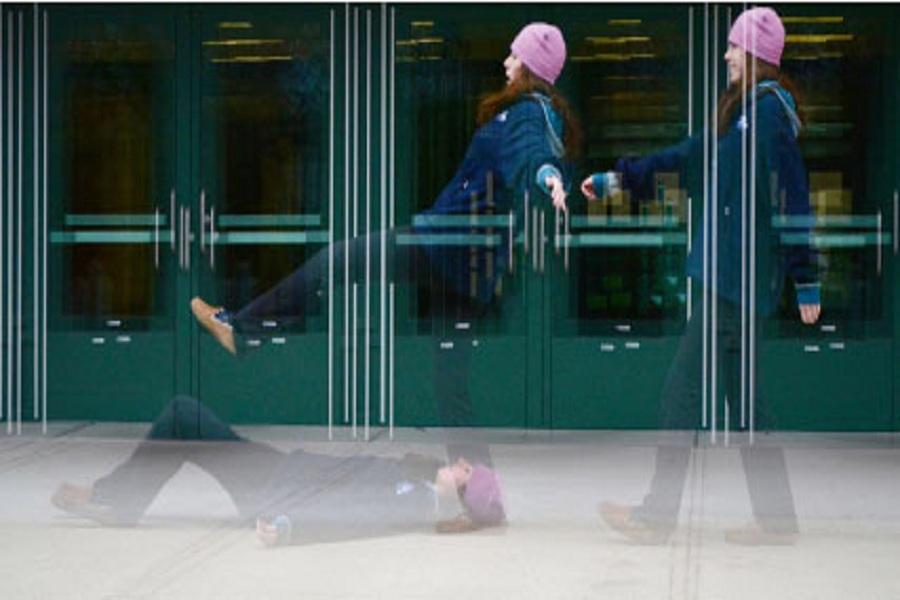 You step onto the sidewalk on a cold January morning, hood up, snow boots on, scarf wrapped around your neck. You really thought today was going to be a snow day, so your morning was already off to a bad start when suddenly, your feet lose traction. You experience the stomach-sinking sensation of slipping across a sheet of black ice that you didn’t see until you were already halfway to landing none-too-gracefully on your bottom on the cold wet pavement.

If you have ever found yourself in this scenario, you are not alone. One in three Staples students who responded to an online survey through the school’s gmail say that they have fallen in the parking lots walking to or from school this year.

“I was walking out up to the front door and I looked ahead to make sure there wasn’t any ice ahead, when out of nowhere, a patch of ice that blended in perfectly with the sidewalk in front of the front door appeared,” one Staples junior who asked to be unnamed said.  “My feet kicked forward while my head got thrown backwards, smashing my body to the sidewalk and throwing all of the books in my bag all over the place.”

In addition to causing embarrassment and injury, some students have suffered property damage.

“Last year, one of my friends slipped at school, fell, scraped her hands, and completely broke her brand new iPhone. Not cracked- broken,” Jaydah Cannon ’16 said.

“The snow removal is adequate (not great), but there is usually a layer of ice under the snow that seems to be ignored,” science teacher David Rollison said.

Students say there are even certain areas they now avoid for fear of falling. Olivia Jones ’15 mentions a few particularly bad spots.

“I was walking down the ramp by the entrance to the theatre hallway and fell right on my butt,” she said. Walking from the Wakeman parking areas also is treacherous, she added.

However, these incidents are not always reported to the administration. After a particularly icy day in December, Principal  John Dodig said that he did not receive a single complaint about conditions on the Staples grounds.

John Horrigan, Westport teachers’ union president, is in charge of fielding issues between the staff and the  administration. Horrigan says he believes that the administration does a good job of keeping parking lots safe for students and teachers and that they respond to complaints efficiently.

“It’s in their best interest to keep it safe — it’s complicated if a teacher gets injured, so the administration doesn’t want to deal with it. They are invested in making sure it’s safe.”

If such an injury were to occur, there are methods in place to ensure that the teacher is heard and the problem is taken care of.

“If a teacher does notice unsafe situations, they should tell the principal, and if it still doesn’t get resolved, they should take a picture and send it to one of the union presidents.”

Horrigan says that, so far, he has received no such pictures.

“Our custodians begin working early in the morning to clear the sidewalks, paths and lots to make it safe,” Dodig said.

However, the administration can only maintain the parking lots on school property. Two-thirds of surveyed students say they know someone who has gotten into a weather-related car accident commuting to school, and eight out of 10 say they have, at one point or another, felt unsafe commuting themselves.

“Every year in the winter, someone comes to class late saying there were accidents all down the roads,” Cannon said. Cannon also says that at times, she has opted to stay home on a school day because she felt it was dangerous out.

Not everyone feels as strongly. Simon Berger ’17 said, “I have occasionally felt a little unsafe coming to school in a car or bus due to ice, although I trusted my parents or bus driver.”