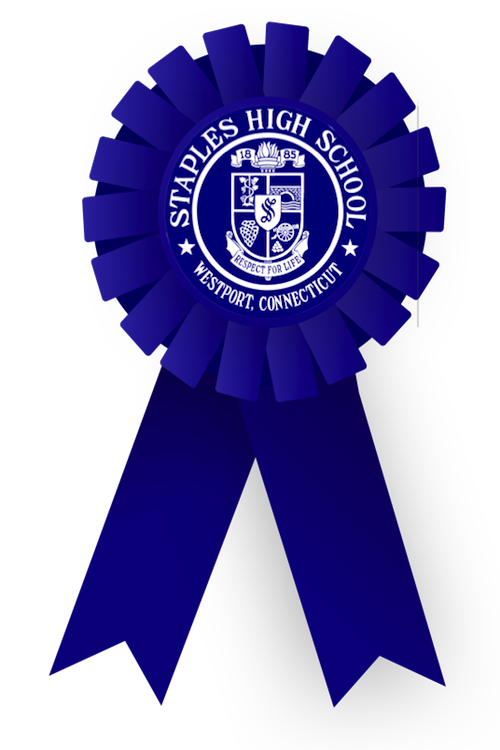 If you walk into Staples any day, you see students sprawled around the library, textbooks and notes scattered. The tables at the end of each hallway are a chaos of studying as students fevorishly flush, dip their heads toward their books and write quickly.  After school, students rush to conference with teachers who squeeze in student after student.

The hard work has paid off.

“I think it’s a great honor, and is a testament to both the hard work and achievements of the students and teachers here at Staples,” math teacher Lenny Klein said.

Many students cited the faculty-student partnership.

“A lot of schools are strictly just about teaching,” Emma Laney ’15 said, “but teachers here care about you and want you to do well.”

Francine Sinay, who works in the academic support department, agreed. “Obviously in Westport, education is valued very highly, and that comes across to the kids who are looking to replicate what their parents have done, and even surpass that.”

In Westport, education is valued at a very young age.

A warm smile spread across the face of Aileen Coyne ’16 as she described her mom reading Goodnight Moon to her and playing with math puzzles.

“When I was young, I would invent things like a rock sifter made out of clothing hangers,” Coyne said.

Students across Staples had similar nostalgic stories of education that occured before they even set foot in the high school hallways.

“When I was young, and I got a 100 on my spelling test, my parents would say, ‘oh that’s so awesome! That’s great!’” Ribolla said, throwing his arms up in exaggerated enthusiasm.

“In a lot of other school systems a child might be failing a class, but the parent doesn’t call to ask why,” Physical Education teacher Jeffrey Doornweerd said. “Here you don’t tend to see that.”

Whether it’s the culture supporting education, or the collaboration between the diligent students and staff, students said they were proud of the award.

“When you say Westport, everyone thinks of a good school system,” Lexy Lannacone ’15 said. “That’s really something to admire.”