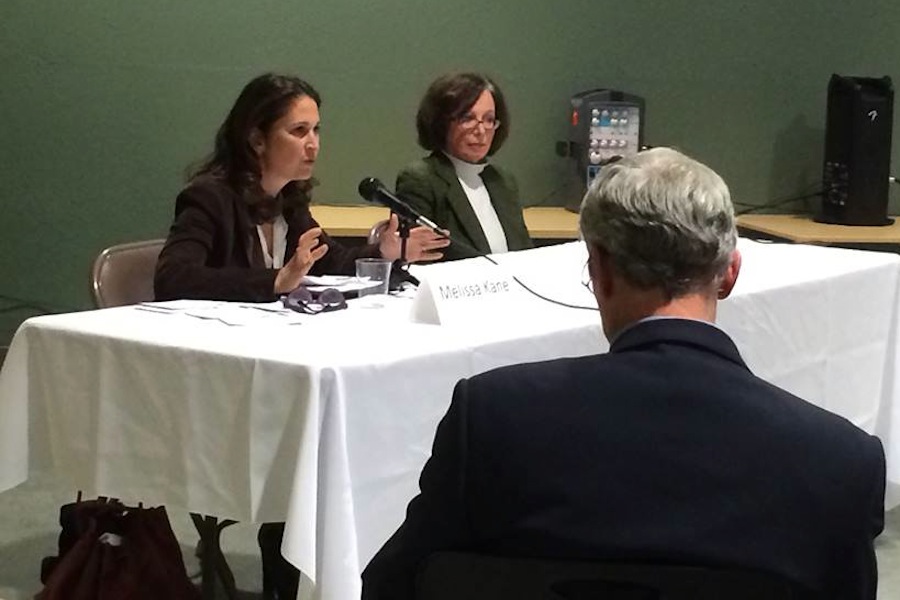 A man listens to Melissa Kane, the Democrat running to be second selectwoman, speaking.

On Monday, Oct. 21, the candidates for selectmen of Westport, Republicans Jim Marpe and Avi Kaner and Democrats Helen Garten and Melissa Kane, debated at Earthplace: The Nature Discovery Center to discuss their plans for environmental issues if elected.

“Our mission is to support the environment through awareness, education and action,” Tony McDowell, the new executive director of Earthplace said. “We all need to know what the issues are before we can act.”

Questions were asked by constituents at the pre-forum and then discussed by the candidates and moderated by Earthplace trustee and RTM member Matt Mandell.

Topics ranged from public transportation to chemical fertilizers to deer population issues and everything green in between.

Despite the debate however, all four candidates seemed to present overall care for the environment.

“I think this is great for the environment because the candidates have done their homework,” Laurie Linton, Associate Director of Earthplace, said. “Whichever party does win, it seems like they both care for the wellbeing of the environment.”

Candidates showed personal and professional ties to the environment throughout the debate.

Jim Marpe shared a personal story how his daughter contracted Lyme disease “no doubt” because of the overpopulation of deer. And Helen Garten noted how her running mate, Melissa Kane, is passionately involved in these efforts—noting her involvement in Wakeman Town Farm and other Green Task Force projects around town—and how if elected, Kane would be appointed to deal with environmental issues.

“In a local election, it’s not about Democrats and Republicans,” Kaner said. “We are all working together to solve an issue that’s bigger than Westport.”

Kane agreed. “We are committed to making Westport healthier and greener,” Kane said.