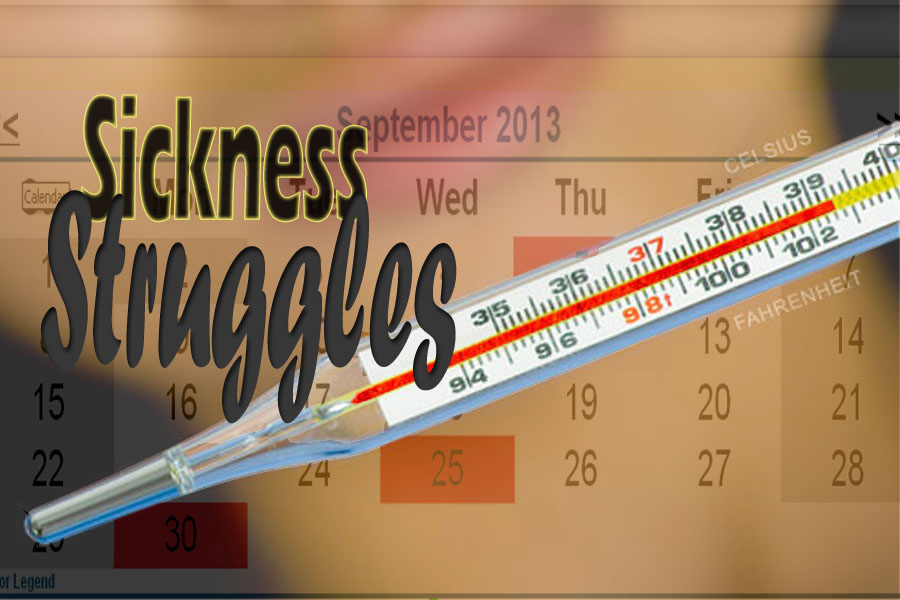 Sick students sometimes come in to school, prioritizing attending class over their health.

The sniffles and sighs.

Although coming to school while sick creates a vicious cycle of contaminating others, many students feel that missing class and playing catch-up is not worth the sick day. Many feel it’s much better to suffer through the school day and in turn, take longer to heal.

Lulu Stracher ‘17 feels the pressure, even early in the school year. “Even though it’s only the first quarter of freshman year, I feel like I have a lot of responsibilities, and if I miss school even if I’m really sick, I will fall behind.”

But, other students feel differently. “I’d take a day off to recover because I think it’s more important to be aware of your health even if you just have a cold… and not be miserable in school and get even more sick due to sleep deprivation,” said Julia Greenspan ‘16.

10th grade Assistant Principal Karyn Morgan, on the other hand, doesn’t think that students should feel pressured about catch-up work because the teachers are so flexible with meeting times to help students. She also doesn’t see the attendance policy as being a variable in the decision. “I think a lot of that is self-imposed pressure because our attendance policy is such that we have flexibility in terms of medical absences.”

Mac Barreca ‘16 disagrees and feels it’s a big factor in his decision making. “I consider all the absences I’ve had in that semester before deciding to take the day off in order to avoid having to appeal.”

Willows Pediatrics Pediatrician Dr. Laura Marks says the key to avoiding the difficult decision of missing school is by “making sure they are having a balanced life, not getting too stressed” and exercising immune-building regimens such as washing hands and getting enough sleep.

School nurse Diane Bosch agrees that the lack of these causes the average back-to-school virus outbreak. She also understands that the pressure affects students. “Yes, I think typically it does, some kids come to school ill because they really are concerned about missing… they really are committed. Sometimes we have to work hard to get kids to understand that when they really are ill they shouldn’t be here.”

English teacher Michael Fulton agrees that the student’s health is, in the end, the most important thing. “In the short run I know it feels overwhelming to miss a day, but in the long run I think it works out. Sometimes you just have to be self-centered like that, you have to be healthy,” Fulton said.