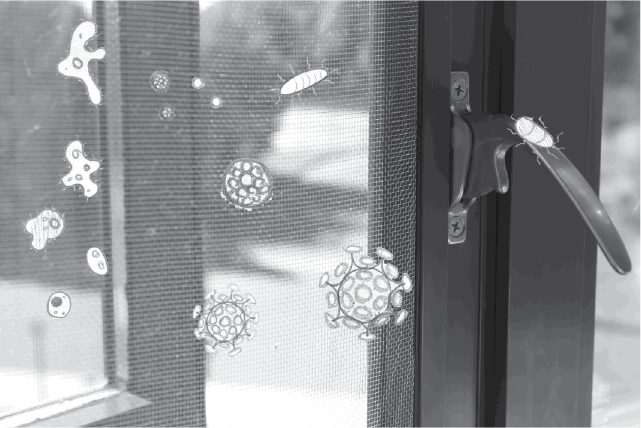 Students might not think about the undetected intruders wafting through classroom windows on an innocent fall day.

Most might just harrumph at being denied a cool outside breeze in a stuffy classroom.

But if they could imagine breathing in pollen, bacteria, loading truck exhaust or pesticide emissions, they might think again.

Getting students and the rest of the school to think is one of the goals of the Air Quality Control Committee, a group consisting of a Staples’ principal, administrator, teacher, custodian, nurse, and parent.

“The name of the program is Tools for Schools (TFS),” district program coordinator JoAnn Duncan explained.

This Environmental Protection Agency (EPA) program is required in all schools by Connecticut law, but Westport’s Air Quality Commitee  exceeds the obligations.

“Westport is very committed to improving Indoor Air Quality (IAQ) in schools,” Duncan said. “We even won the EPA Excellence Award in 2010.”

The award’s press release applauded Westport for “attention to pest management, use of green cleaning products and having IAQ incorporated into the schools’ long-term goals.”

While the common thought might be that fresh air can do a body good, it may cause harm.

“Everyone thinks fresh air is great, but it’s really not that great,” TFS member Assistant Principle Richard Franzis said, He explained referring to the fact that indoor air systems are harder to regulate in larger buildings like schools.

In fact, according to the CT School Indoor Environmental Resource Team, indoor levels of pollutants can be two to five times higher than outdoor levels.

“I think that because we can’t see [pollution], it’s something we choose to ignore,” Julia Greene, ’17 reasons.

But even as avidly eco-conscious a student as Greene was shocked to hear the gory details of Indoor Air Quality contamination.

“I was totally ignorant that indoor air pollution was even a thing,” she admitted.

To many, like Greene, it could be Staples’ pristine appearance that makes it hard to believe that the air could be contaminated.

This is simply another testament to the AQC’s diligent upkeep.

“Some people think the policies are unnecessary, but I think we should be thankful that our district cares enough that our air quality is good,” former TFS member and AP Environmental teacher Michael Aitkenhead said.

Duncan previously grappled with uglier sides of indoor air when she worked with Ridgefield schools and helped them start a TFS program.

“I got involved as a concerned parent because there was much renovation going on and my children had severe allergies and asthma,” she said.

TFS tackles potential and existing IAQ problems by keeping a lookout for mold risks, cleaning products (both) eco-friendly and unscented, and maintaining strict control of ventilation.

Duncan explains that the vents filter incoming air for contaminants, and that unfiltered outdoor air is what upsets the vent system’s temperature levels.

“The district has taken a more cautionary approach,” Aitkenhead said. “While we do already have good air quality, they think about how we can maintain or improve it so we don’t run into problems.”