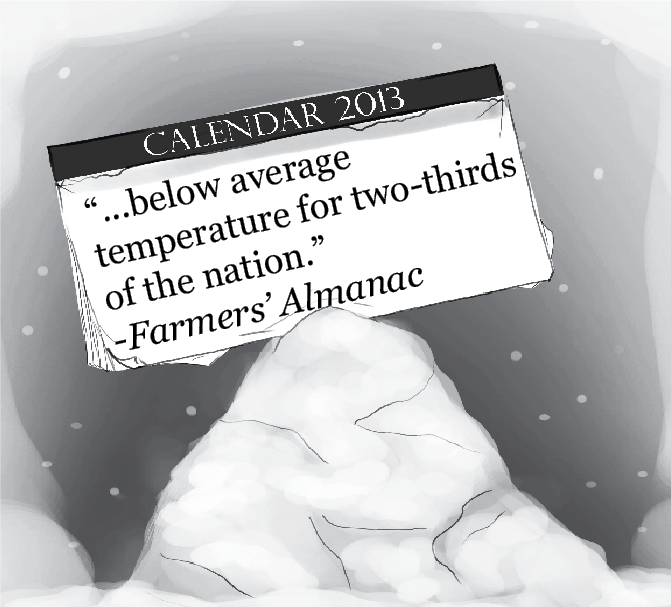 New England is no stranger to snow.

In the past couple of years, New Englanders have grown accustomed to power outages, school delays resulting in a prolonged school year, and freezing cold weather.

Westport residents can expect nothing less from this upcoming winter.

The Farmers’ Almanac, an annual periodical and a website that provides weather forecasts, said in its 2014 winter weather predictions: “We are forecasting a winter that will experience below-average temperatures for about two-thirds of the nation.” The article also forecasts that New England will receive “lots of snow.”

Unfortunately for those who aren’t ready to face another difficult winter, the Farmers’ Almanac has proven itself to be a pretty accurate source.

On the Farmers’ Almanac website, Almanac readers claim that the forecasts are “80 to 85% accurate.”

“As we move into the heart of the winter, it’s looking more and more like we may get some big snowstorms,” Pecoriello ’15 said. “It also may be tough to shake winter off as we head into the early spring months.”

Although snowfall usually indicates delays or off-days from school, Staples students are not excited.

“If this winter is going to be worse than the last, then I don’t like it,” Olivia Jones ’15 said. “Last winter was bad enough.”

However, one prediction that has created excitement is that there may be snow on the day of the Super Bowl. Not to put a damper on the positive buzz, Pecoriello is again skeptical because of how early the prediction was made.

“While I believe it’s going to be a fairly cold and possibly snowy February, to say that there will be a major snowstorm on the day of the Super Bowl is a forecast begging for publicity,” Pecoriello ’15. “The chances of there being a blizzard on that day is just as likely as it being sunny.”