Subbing Out: Spending on Substitute Teachers Goes Over Budget 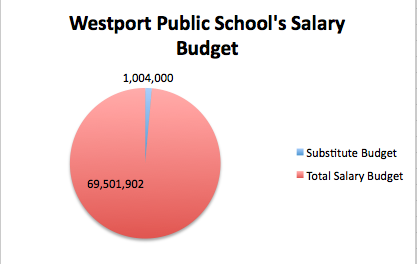 These numbers are based on the Board of Education's proposed budget for the 2013-2014 school year.

During the 2012-13 school year Westport Public Schools went $222,039, 0.33 percent, over budget on salaries due to an “extensive use of substitute teachers and non-certified staff overtime,” according to the Westport Board of Education agenda for Aug. 26.

Students were also surprised to hear how much was spent on substitute teachers.

“I guess since a substitute isn’t a permanent classroom feature, I suppose I never thought to wonder how much they costed the district,” Emily Schussheim ’17 said. “However, now that it’s apparent there are large sums of money spent on them, I never would have guessed it’d be that much.”

Despite going over budget last year because of substitutes, the Westport Board of Education’s 2013-14 adopted budget calls for only $1,004,000 to be set aside for substitute salaries, almost $61,000 less than last year’s $1,064,945 budget for substitutes.

Schussheim called it “ridiculous” for the Board of Education’s adopted budget for substitutes to be lower than last years after going over budget.

“The cadre of building subs allows each school to maintain a minimum number of substitutes on hand to address teacher absences and to provide coverage for teachers attending a professional development session,” Longo said.

According to Longo, around five percent of teachers are absent a day due to illness, meaning that approximately 28 substitutes are needed. However, those statistics do not account for long term substitute teachers or substitutes who are filling in for teachers who are in training sessions or meetings.

Longo also stressed that the $1,004,000 budget includes the estimated cost, $85,000, of non-certified substitutes, who fill in for “support staff absences such as office secretaries.”

At this time teachers cannot comment on budget concerns.

Despite being over a million dollars, the substitute budget makes up only around one percent of the entire salary budget.