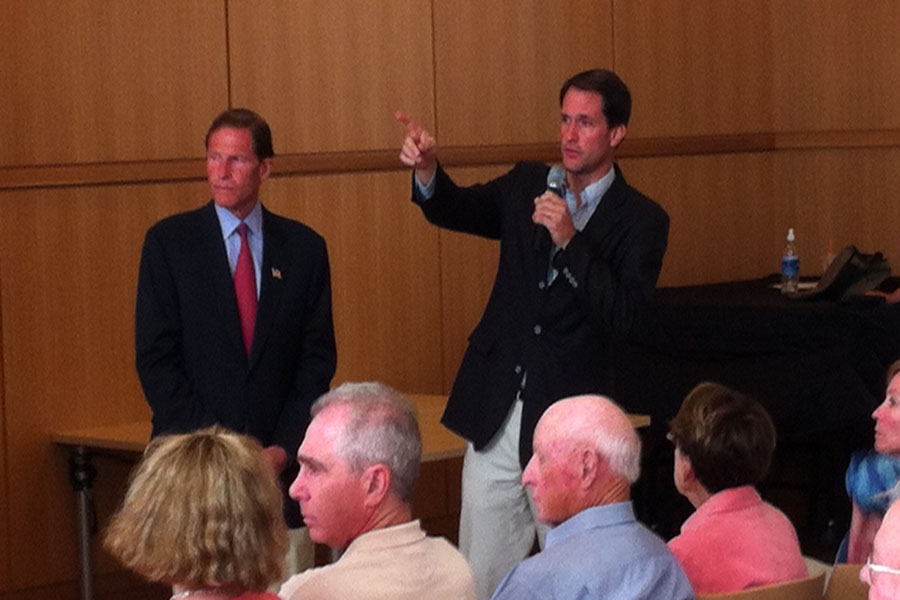 Rep. Jim Himes addresses a speaker from the audience at Sunday’s public meeting on Syria.

People packed into the auditorium at the Darien library on Sunday, Sept. 8, filling chairs, aisles, and even crowding behind the library in order to listen and speak at a public meeting on Syria.

Rep. Jim Himes and Sen. Dick Blumenthal were present at the meeting, answering questions and hearing their constituents’ viewpoints in a public forum. “The point of this day is for you to speak,” Himes said. “What we want to do more than anything is listen.”

At the beginning of the meeting, Himes said that he remained skeptical on involvement due to the lack of international support, risk of retribution, and uncertainty of future involvement in Syria. Blumethal’s position was undecided. “I am still listening and asking questions,” he said.

However, many attendees had a clear stance on the issue. Mary Abbamonte, a Stamford resident, came to the meeting sporting pink clothing to represent Code Pink, a grassroots peace movement.

Other audience members vocalized their opposition to involvement in Syria. Some speakers voiced concerns about economic motives, including the military industrial complex. Others rejected the role of America as the world’s policemen. “There are so many civil wars around the world. We can’t get into every one of them,” said Vicky Mackenzie of Stamford.

Anna McGovern, a Monroe resident who lived in Syria as a child, provided a unique perspective. “The people of Syria are pawns of a proxy war between East and West,” she said. McGovern asked Himes and Blumenthal to cast a “no” vote if there was any doubt about evidence supporting invasion.

The pro-invasion side was represented too in the meeting. Westport resident Mike Gilbertie supported an invasion of Syria and the trying of Syrian President Assad as a war criminal. Anne Lundberg of Ridgefield also supported intervention. “A more political solution is not available until the balance of power is changed,” she said. Lundberg was in favor of Kerry’s proposal to “deter and degrade” Assad’s ability to use chemical weapons.

Besides sharing their opinions, speakers also posed questions to Himes and Blumenthal, asking the representatives’ opinions on Syrian rebel groups, past atrocities committed in Syria, and Assad’s motives. Himes and Blumenthal did not have concrete answers for many questions, due to the complex nature of the situation and lack of firsthand information.

Other audience members probed as to how much the opinion of constituents would sway the representatives’ votes. Himes said that he prioritized the voices of the people. “I would need an overwhelming case to override the people I represent,” he said. Blumenthal echoed his statement. “I am first and foremost in Washington to advocate for the people of Conn.,” he added.

In the second half of the meeting, an audience member called for an informal poll to show the balance of opinions in the room. The majority of the room raised their hands in opposition of intervention in Syria, although some supported it, and others were undecided. The stances in the room were made clear in the animated crowd’s cheering, clapping, and grumbling in response to certain speakers.

Audience members represented not only varied opinions, but a varied demographic. Although the majority of the crowd was older adults, a few children and young adults were present. One speaker, 25, had already actively engaged with Himes via Twitter, a way that the Senator connects with many constituents.

The event closed with lines of people still waiting for the microphone. Himes directed people to give their name, number, and email to his staff members as another way to have their voices heard.