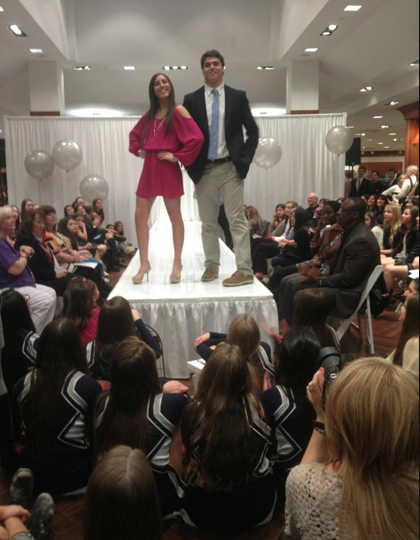 On Mar. 15, the Staples Varsity Cheerleaders held their 16th annual Varsity Vogue Fashion Show and Auction at 7:00 pm at Mitchell’s of Westport.

“It’s a fundraiser for Staples Cheerleading because we don’t do many others throughout the year and we have a lot of costs to cover,” said co-captain Zoe Googe ’13.

All proceeds from the event go to support the Staples varsity cheerleading program, Staples athletic facilities, PAL cheerleading and, on behalf of the Mitchell family, St. Vincent’s Cancer Center.

At the beginning of the event, freshman and sophomore cheerleaders, dressed in their cheer uniforms, sold raffle tickets for $5 each or 5 raffle tickets for $20. Some prizes that could be won from the raffle included items such as a Benefit make-up party, a giraffe from “Melissa and Doug”, and an iPad mini.

A silent auction was also held throughout the night allowing people to bid on gift bags with items including gift cards and clothing.

In addition to selling the raffle tickets, underclassman cheerleaders also walked around to serve food—a variety of sushi and vegetables—to the people who attended the event. They then performed two cheers, including the crowd favorite: Rock Steady.

“We’d like to thank you all for coming to support our event and honor our senior athletes,” Watson said.

Bill Mitchell, owner of Mitchell’s, was also in attendance.

“The evening is about you guys [Staples athletes], but it is also about giving back and making a differences,” Mitchell said.

Mitchell joked that the Red Sox tickets were “cheaper than a pair of socks at Mitchell’s.”

Finally, the fashion show started, and the senior girls on the cheerleading team walked the runway with the Staples football and basketball captains. These seniors walked the runway in many different Mitchell’s outfits. Each couple added their own unique style by posing at the end of the runway.

“It’s a great way for Mitchell’s to get business and the team to raise money” Googe said. “Most people enjoy the runway aspect of it because it’s fun to get dressed up and laugh at your friends.”