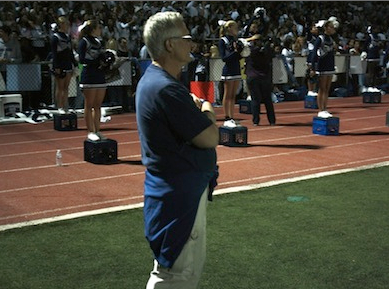 Precautions were taken, warnings were given through e-mails and assemblies, and students were cautioned repeatedly heading into last Friday’s historic football game. Principal John Dodig was apprehensive heading into Staples’ first ever night game under the lights.

A week later, Dodig says he could not be more proud.

The Staples v. St. Joseph’s football grudge-match anticipated a large crowd and a close competition—unfortunately, with the excitement comes the bad behavior.

“From past experience, nighttime games are different than daytime games,” Dodig said, “So if no one can see you, and no one knows who you are, you might behave differently than if you were sure someone can see you.”

Thankfully, the visible presence of police officers was not needed due to a safe, well-behaved night by the Staples student body.

“It was a little crowded but all in all very well behaved,” said Peter Greenberg ’13.

Dodig, who at first feared the night game to be dangerous, could not have been more proud of his students. He sent a letter via email to all Westport parents praising their kids and thanking them for a safe night.

“On a perfect night, with perfect behavior,” Dodig said, “the sea of white could not have delighted me more.”