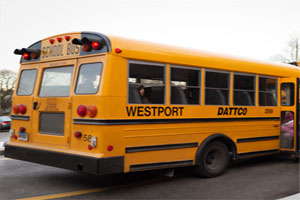 Principal John Dodig was informed by Adam Rosen, Principal of Bedford Middle School, that on the mornings of Sept. 20, 27, and 28, severe traffic is to be expected between 7 a.m. and 7:15 a.m. Dodig immediately issued an email to parents of Staples students detailing that the extra traffic is due to the 7:15 a.m. drop off time for the eighth  grade annual field trip to Sharp Reservation in Fishkill, NY.

Dodig advised parents as well as student drivers to leave their homes much earlier than usual to alleviate traffic, or suggested that parents who drive their children to school have them take the bus on these days.

This is not the first time that severe traffic has been an issue. During the 2010-2011 school year, students were warned well in advance of a three-week period in which North Avenue was to be re-paved, thus creating brutal traffic along the route to Staples.