Senior Girls Recognized By Writing On Cars, May Cause Hazard 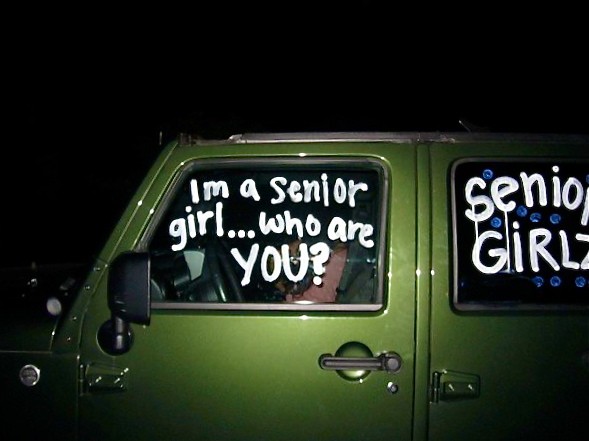 Excited for their last year of high school, senior girls have decorated their cars to show their authority and enthusiasm. Morgan Singer's '11 car reads "I'm a senior girl...who are YOU?" | Photo contributed by Freja Andrew '11

No senior girl goes unnoticed at the beginning of the school year. Whether on campus or off, they’re easy to spot. Just take a look at their car.

On the first day of school almost every senior girls’ car is covered in writing. Some cars have a unique slogan on the side windows, but almost all of them say “Senior Girls” in a bold face on the back.

This is a tradition that has been passed down for many years. Before the first night of school every year, senior girls get together and decorate each other’s cars with washable markers.

Although seniors such as Amy Smith ’11 say that they embrace this tradition, others have a different perspective. Morgan Singer ‘11 and Morgan Tacopina ’11 found that the writing causes a distraction. Singer said, “It was awkward driving around town with [the writing] on.” She said it was embarrassing outside of the school grounds, and drew unwanted attention to her car.

Another downside to the writing is that it can be an obstruction of view. “It was a hazard. I couldn’t see,” Tacopina said. Singer agreed, explaining that seeing out of her back window was especially difficult due to the writing.

Some girls only keep the writing on their cars for a couple of days to avoid this hazard. Singer said the writing on her car only lasted around a week due to the potential danger that it became. Tacopina took action even more quickly, and went to the car wash right after the first day of school.

Sergeant Farrell of the Westport Police Department said that officers around town notice the writing. However, he hasn’t seen writing that could pose a threat to the visibility of a driver. “If we see a car that we determine is not sufficient to see clearly out of, we will make the stop and issue a warning,” Farrell said.

Otherwise, no senior girl car will be pulled over because of its appearance. This means that if a marked car is seen out past curfew, it will not be pulled over based on the assumption that a minor is driving. Farrell says that there have been no incidents of this because, “that would be considered profiling.”

As for the parents’ perspective, Singer says that her mom loves the enthusiasm that the girls have for the tradition. “My mom thought it was so fun, she loves all the school spirit,” says Singer. She said her mom chooses to recognize the pride behind the writing, rather than focusing on its negative effects. “Most of my friends’ parents seem to feel the same way.”

Whether embraced or discouraged, the writing on senior girls’ cars is a tradition that is recognized by the entire community. It marks the beginning of a new school year. You can always be certain that it’s fall once you start to see the senior girl’s cars around town.