In Remembrance of Cameron Bruce… 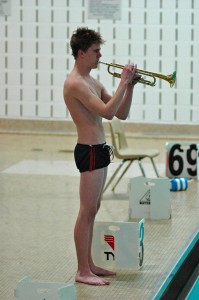 The death of Cameron Bruce ’10 on Sept. 13 at Queens University in Kingston, Ontario, has had a large impact on the Westport community, both inside and outside of Staples.

“Just think of all the high school kids in America—there are millions of them, and how many of those high school kids go through their four years of high school almost anonymous,” Principal John Dodig said. “That’s not true at Staples and [Bruce] is a perfect example, because even though we have 1,835 kids, just about everyone knew him—from swimming, from playing in a concert or they had him in a class, or they just saw him through the halls and he kept saying ‘hello’ to everybody.”

Bruce’s teachers recall his passion for learning and vibrant presence throughout the school.

“Cameron, with his wacky thatch of hair, his million dollar smile, his brilliant creativity, and his kindness and honesty, lit up my sophomore English class every single day,” Julia McNamee, Staples English teacher said.

“As far as I know, every life that he was a part of was made better for knowing him,” Schager said.

Outside of the classroom, Bruce participated in diverse extracurricular activities.

Band Director Nick Mariconda, who worked with Bruce in the jazz band, saw Bruce grow as both a musician and a person throughout his four years at Staples. Bruce was not only a leader in the orchestra, but he was an inspiration to Mariconda as well.

“It’s kids like [Bruce] that make me as an adult, as an educator, feel good about what I do,” Mariconda said.

Bruce was also a member of the Norwalk Youth Symphony. Tara Simoncic, former conductor of NYS’s Principal Orchestra, worked with Bruce for a number of years. Despite the intense rehearsals that Simoncic led the orchestra through, Bruce had a way of lightening up the mood.

“He was incredibly funny. He could make me laugh during orchestra rehearsals, which is not an easy task. He lightened things up. He was one of those kids that I felt so lucky to work with every week because just seeing him made me smile,” Simoncic said.

In addition to being a musician, Bruce was also a swimmer. He was on the Staples varsity swim team during his four years at Staples. During his senior year, Bruce was a captain for the team and won an Academic All-American award and a Staples Scholar Athlete award.

Jeff Cheng ’10 worked with Bruce in NYS and Staples’ Symphonic Orchestra, but also knew Bruce as a friend.

“Whenever Cameron was in the room, we’d have fun. When he laughed, he would put his head back and do this thing with his chest and his arm—it was the funniest thing in the world, just like the classic Cameron,” Cheng said.

“[Cameron was] an amazing, intelligent, caring, modest, sincere, funny, and talented human being who made our school and town a better place—he would have done just that with the world if he had gotten the chance. It will never be the same without [him]… he has left us with the knowledge that one person really can affect so many people in such a positive way,” Campbell said.

Bruce’s funeral will be on Saturday, Sept. 25 at 2 p.m. at the Saugatuck Congregational Church.

Donations in Cameron’s memory can be made to the Cameron Bruce Scholarship for Trumpet at the New England Music Camp at 8 Goldenrod Lane Sidney, ME. 04330; or for a grant which will be established in his memory, at Staples Tuition Grant P.O. Box 5159 Westport, CT. 06881-5159.