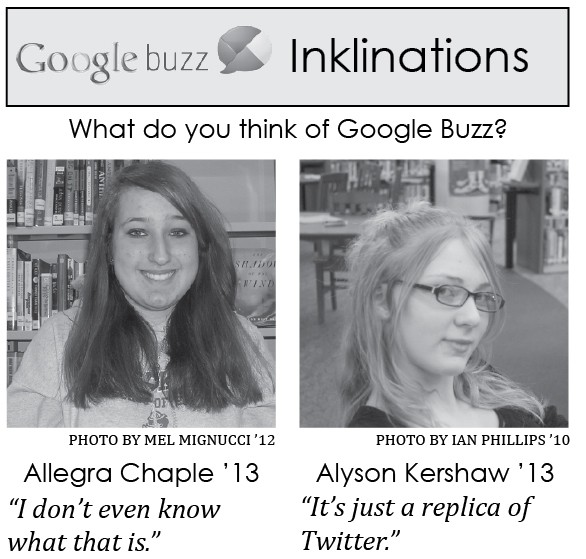 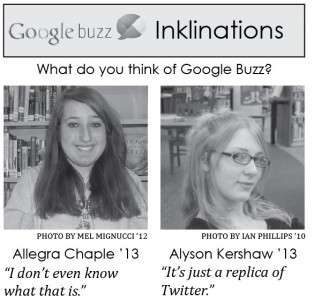 As people around the world can’t seem to keep their fingers off their keyboards, between tweeting and writing on each other’s Facebook walls, Google has announced that it is contributing its own site to the social networking phenomenon: Google Buzz.

Google Buzz is a revolutionary site on which, as its site says,  “people can communicate with ‘friends’ through photos, statuses, and comments.  Unlike other social networking sites, though, people can see what their friends are posting in places other than Google Buzz, as it is connected to other internet sources such as Picasa Web Albums, Google Reader, Google Chat, Flickr, and Twitter.

For example, when a person posts something on Youtube.com, this action will transfer into his/her friends’ Buzzes.

It also has other distinguishing features, such as the ability to use thumbnails to see larger images, and to see posts recommended by other friends.

The most notable and obvious feature, of course, is that it is connected to a person’s Gmail account.

Under the “Inbox” link, is a “Buzz” link that leads a person right to their Buzz account: no new passwords or accounts are needed.

After the Feb. 8 announcement of Google Buzz, it has been the talk of many blog sites, where its usefulness and comparison to Twitter and Facebook have all been discussed.

At Staples, people are slowly starting to learn about it.  Many students have indeed experimented with the site and accessed their accounts, but many people have also barely heard anything about it.

Melissa Sweeney ’11 said she “never even heard of it,” although she also admits she is sometimes slow to engaging with new technology.

Andrea Stefeson ’11 also said she does not use or know much about it.

She said that her younger sister, who does not use Facebook, uses it.

The people who have looked at the site, and who understand it, have varying opinions about it.

Alexa Senia ’11, who has watched the Youtube video but who does not use it, thinks Google Buzz is a positive creation.

“You can access your Gmail account from Google Buzz. I mean people use their e-mail everyday for everything. School work, business, just for fun, etc. That is why I feel Google Buzz will be a little more helpful to people in the future, because it can connect with your e-mail,” she said.

She also compared Google Buzz with Facebook, which she currently uses, saying “Don’t get me wrong you can [post statuses] on Facebook, too, but Facebook is almost more like a game to people…we have Farmville and quizzes. Google Buzz, which is a bit more organized, is more for teenagers going to college and for adults, because it is not as child-like.”

Eitan Dror ’10, who stumbled upon Google Buzz after seeing it in his Gmail inbox, similarly states that the connection to e-mail is helpful, but that it “seems just like another Facebook.”