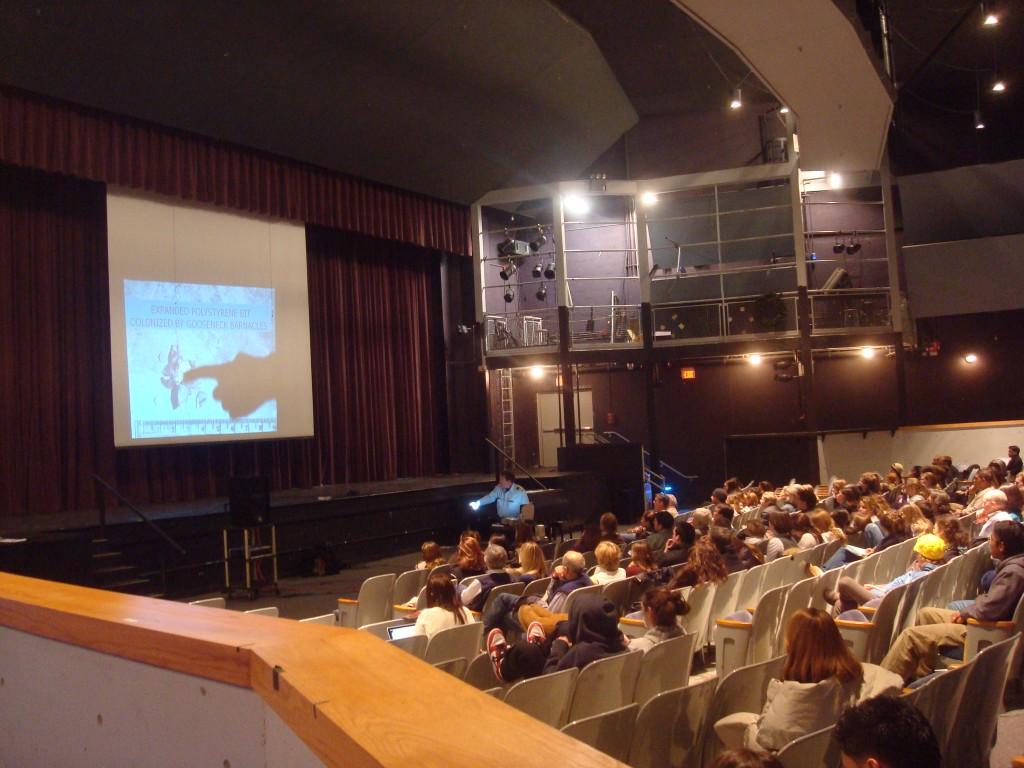 Moore, who has spoken on the Colbert report about this issue, essentially discovered a huge patch of garbage, one of five patches in five gyres, that is 3.5 million tons, 80 percent of it plastic, twice the size of Texas, in the ocean- a problem more severe than it sounds.

As Moore said in an ABC video showed at the presentation, “the ocean has become a plastic soup. This is a soup.”

With regards to why this is so, “the amount of garbage is increasing, proportionate to the increase in disposable items[such as umbrellas and toothbrushes],” Moor told the audience.

When looking for plankton and other foods, “they’re being presented with [plastic] mimics the right size… the right texture and they’re being fooled,” said Moore, adding that the garbage patch is a “very potentially threatening phenomenon for the most common species of the fish in the ocean.”

Along with the organisms affected, Moore also discussed the different types of plastics and the methods of testing them. In every sample taken, Moore found plastic.

When addressing the problem from a philosophical standpoint, it’s an example of the “tragedy of the commons,” Moore said. “It’s sort of the [refuse] of everyone yet belongs to now one.” Moore noted that the United Nations isn’t required to fix the problem, and countries do not have the funds to, therefore, the responsibility has been placed on the shoulders of private organizations.

Becky Watson ’10, a self-proclaimed ocean-lover, found this aspect of the serious presentation to be a bit depressing.

“It saddens me that no one is taking responsibility because its not in anyone’s territory so no one is cleaning it up,” said Watson.

Regardless, Moore believes that in order to prevent the growth of the patch, we should “build out of good quality materials that don’t pollute.” With regards to the ability of the public to make a difference, there is a way to help.  Moore believes that the best ways to help are refusing to have items packaged in plastic (refusing), reusing, and recycling, so everyone can help to prevent our ocean from getting polluted with garbage.