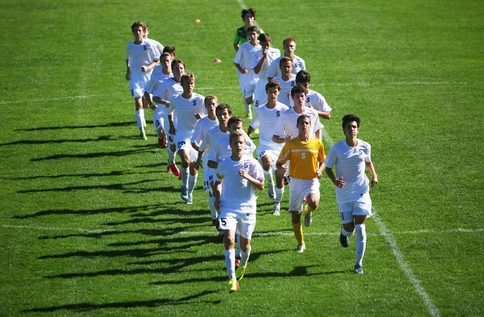 With a 1-0 win over Brien McMahon this past Tuesday, Staples Boys Varsity soccer clinched a spot in the post-season, seizing the seventh seed in the FCIAC tournament. They will play their first playoff game Friday against number two Danbury on the road.

The Wreckers’ end of the season success has showcased their progress as a team.

“Yeah we’ve had a few bumps in the road,” Kenji Goto ’16 said. “Every team does and the injuries did not help, especially Andrew Puchala being injured for the majority of the season. However, every good team always overcomes what’s thrown against them and we set a goal to win our last six games and make the FCIAC and state tournament. We won five of our last six, reaching our goal.”

The victory against McMahon marked the seventh straight year that Staples has made the FCIAC tournament and gave them a record of 9-5-2 to finish the regular season.

On the Wreckers’ end of the season success, captain Michael Reid ’15 said, “We’ve definitely picked it up recently, so we’re hoping to carry that over against Danbury.”

When asked whether he thinks the team has what it takes to make a deep run in the tournament, Reid ’15 responded, “Yeah I mean we’ve tied and come really close against the top two teams, and we beat Greenwich, who is one of the better teams, so we know that we can.”

What makes the last five victories even more satisfying to the Wreckers, is the fact that prior to the run, they had lost two games in the same week against Westhill and an undefeated Ludlowe team.

Their goal of taking all six games had been achieved before by a 2005 Staples team that Goto ’16 said, “[they had] to look up to. Just like us, they had three back to back games to qualify for FCIACs. We knew it had been done before and that we could do it again.”

The 2005 squad ended their season with a similar record to this year’s team, finishing at 11-3-2.

Coach Dan Woog discussed the run that this year’s team went on. When asked if the stretch was a result of any fundamental differences, Woog said, “It was less fundamentally different, and more ‘Here’s our job. We have to really focus, train hard, work together, support each other, be positive, and never lose sight of our goal.’ We always want to be better in October than in September, and better in November than October. Our guys have worked very hard, and I’m glad for them that they’re seeing the results.”

On the first tournament matchup against Danbury, Woog continued, “They scored first when we played them early in the season. We tied the game with seconds to go before halftime, and it was a very even match. They’ve had a great year, and we’re coming in strong.”