Saugatuck rowers paddle their way to a victory 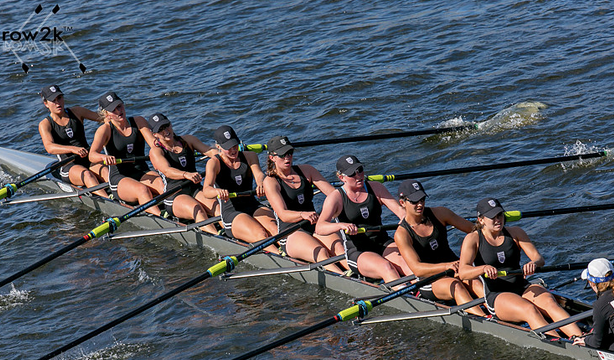 The women's youth eights boat from the Saugatuck Rowing Club competes in the Head of the Charles Regatta where they came in first place.

On the weekend of Oct. 17, both the boys and girls rowers from the Saugatuck Rowing Club made their way up to the Charles River for the annual Head of the Charles Regatta, one of the most prestigious regattas in the world. At the event, they captured first place in the women’s youth eights division and a sixth place finish in the men’s youth doubles division.

Since its commencement in 1965, the Head of the Charles Regatta has annually hosted the world’s best rowers, and the competition hosts nearly 11,000 rowers and over 400,000 spectators annually. Needless to say, placing well in this regatta is quite the feat.

Lucas Manning ’16 competed in the men’s youth doubles division. This division involves boats with two people each, who row for 4,800 meters. Manning was in awe of the magnitude of the race, describing it as “awesome.”

He added that, “You get huge crowds on the sides and bridges cheering. That’s not something that happens usually at regattas.” Along with partner Harrison Malec ’15 the tandem took sixth place.

There are two styles of rowing, sculling and sweeping. Sculling is when each rower has two oars, and sweeping in when rowers on opposite sides of the boat each have one oar. Mannings duo was sculling, and the first place finishing girls raced by sweeping.

Lelia Boley ’16 is a member of the girls boat that won their event. She credited the hard work and dedication put forth by the team for their success, “This group of girls really worked for [the victory],” noted Boley, and she added that winning the race “was an incredible feeling.”

The training sessions leading up to the Head of the Charles were often grueling. “There were days when we would be out on the water until 6:30 getting a feel for the boat and our teammates’ strokes,” Boley said. In the days before the race, the training involved long, steady rows with intervals of shorter, intense segments in order to be in their tip top shape.

The rowers’ next regatta will take place on the weekend of Oct. 15, at the Head of the Schuylkill Regatta in Philadelphia, which dubs itself, “America’s favorite regatta.”