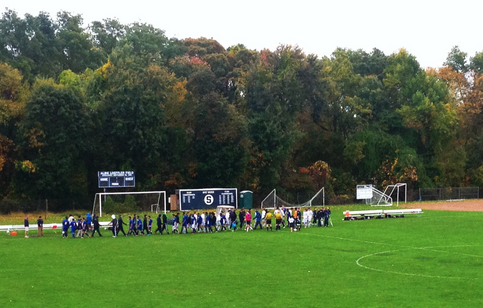 After fighting the harsh weather and tough defense of Harding High School, the boys’ varsity soccer team shakes the hands of their opponents at the end of their last home game of the regular season on October 22. The Wreckers ended the game with a 4-1 defeat over Harding.

On Wednesday October, 22 the boys’ varsity soccer team conquered Harding High School (record of 0-13), defeating them 4-1 on their senior day and last home game of the regular season.

Before the team took the field, the senior varsity players were recognized. Each of the seven seniors gave flowers to their parents and took pictures as part of the senior day ceremony.

Ironically, although it was senior day for the boys, many of them did not in fact get playing time. The reason for this, according to player, Gabe Pensak ’15, is that the team has already locked their place in the FCIAC Tournament, so it was decided that the best decision would be to rest the starters during their game against Harding in order to avoid any injuries before the first FCIAC game on Friday.
“We’d already had two games in a row, so a lot of the seniors including myself were absolutely exhausted, so it was pretty nice to be able to relax and watch the younger kids play,” senior varsity captain, Michael Reid ’15 said.

After the short ceremony, it was time for the boys to get focused. The players huddled on their knees for their customary pre-game pep-talk in order to mentally prepare for the game.
The game had a slow start with no goals until 20 minutes into the first half. The first goal was scored by Harding, leaving the Wreckers one behind on the scoreboard. With multiple attempts at goal, the team was unable to catch up to their opponents by the time the clock for the first half ran out.
“The first half overall was poor. We lacked communication and intensity to win tackles and play smart soccer,” Pensak said.

With the second half came gusting wind, lots of rain and Staples domination. Fifteen minutes into the second half, Daniel Reid ’17 was able successfully shoot and score, tying up the game. Ten minutes later, Josh Berman ’17 headed the ball into the net, giving Staples a 2-1 lead over Harding.
Another notable player during the second half was Teddy Lawrence ’17, who got called up for the game. He had an especially strong performance, winning a number of tackles. “He was the spark we needed in the midfield,” said Pensak.

The last two Wrecker goals go to Graham Gudis ’16. The first one thirty minutes into the second half, off of a free kick after a Staples penalty, and the next with only two minutes and thirty seconds left in the game. Gudis was able to add two more points to the scoreboard, leaving the Wreckers with a 4-1 win against Harding.

“Today was a total team effort, and everybody on the field stepped up, which enabled Berman, Reid and myself to find the net,“ Gudis said.

The next game for the boys’ varsity soccer team is this Friday, October 24 at 5:30 pm against Danbury at Danbury High School. This will be the first round of FCIAC’s for the boys, so be sure to be there and be loud.