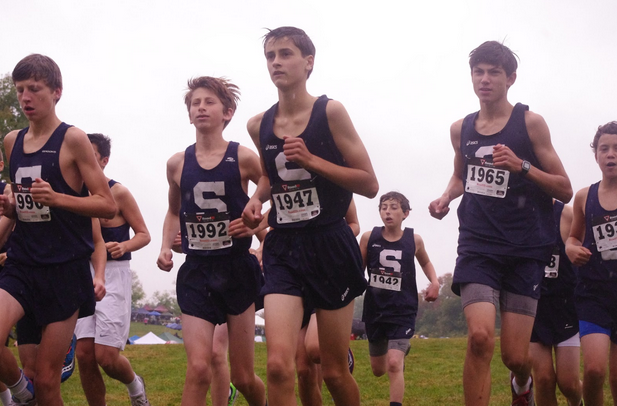 Freshman boys’ XC warm up and do striders to prepare for their race at Wickham Park Invitational, the boys placed fourth in the Freshman race.

Following an undefeated dual meet season, the boys’ Cross Country team continued their season with an invitational at Wickham Park this past Saturday. This invitational was no different from the boys’ past races in that they had much success: Varsity took home the winning title, JV placed second and freshmen took fourth place.

This course, known for its near impossible hill, the Green Monster, proved even more difficult in the rain. Because a majority of the coarse follows through the woodsy trails, the dirt became mud in which many racers lost balance and fell.

About the intensity of the rain, Will Landowne ’18 was upset with the unyielding weather conditions however managed to acclimate.

“It’s more of a mental thing, you’re slower in the mud,” Landowne said. “You won’t enjoy it, but it’s just a drain on your physical ability.”

About Staples’ ranking at the Wickham invitational, Doug Raigosa ’16 was surprised at how far ahead he was.

“I was thinking, ‘am I going way too fast because I’m way upfront, am I going to driscol this?’” Raigosa said.

Jackson Morrow ’16, a representative from Lewis Mills High School, recognizing Staples’ superior Cross Country program, did not doubt that Staples would do well during this invitational, despite the poor weather.

“Staples is amazing and we should probably try to be them, they’re royalty in the Cross Country realm,” Morrow said.

This  invitational is less than a week from the Cross Country FCIAC, for this reason the girls’ team decided against participating in this event.

“We’ve had meets within close proximity before,” John Foster, boys’ Cross Country assistant coach said. “This is nothing new to our guys.”

However, Foster said that this invitational is less concern for the team than FCIAC or States might be.

“I have faith in our training program and hopefully we’ll be coming out on top when it counts at States and FCIACS.”

About the Staples’ training program and its flattering reputation, Foster said, “Staples has a longstanding tradition of success. […] It has always been the only option.”